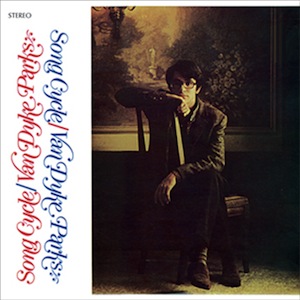 Van Dyke Parks is best known for his work with Brian Wilson, penning those imaginative lines from the the SMiLE era (“I’ve been in this town so long that back in the city I’ve been taken for lost and gone and unknown for a long, long time”). Beyond his work with the Beach Boys, Parks had an impressive and varied career, often working with a number of other groups, as varied as Paul Revere and the Raiders, The Byrds, Tim Buckley — all the way to Joanna Newsom. His marvelous solo debut, Song Cycle, is a classic and poetic tour de force.

Musically, it may be more of a “song spiral.” Motifs aren’t recycled or revisited as much as they are abandoned for new ideas. The orchestration is borne of the poetry, the words directing each instrumental movement. Song Cycle is an album to let yourself soak in, to stay with for a week or even a year. Recommend listening with the lyric sheet in hand when the layered sound of ever-changing chamber orchestra can be heavy for the mind to absorb concurrently with the poetry.

Being a fan of SMiLE most likely won’t offer a free pass to Song Cycle. The album is dense and difficult to infiltrate. There are traces of inspiration here and there, possibly a glimpse to what Brian could have done with SMiLE if he’d had the encouragement Van Dyke had in Lenny Waronker.

Truthfully speaking, I’ve never really understand the concept behind the album. As far as I have read, the record was intended to span the breadth of American musical styles; i.e. a touch of bluegrass (Steve Young singing Black Jack Davy in a clip that introduces the record), an homage to Gershwin/Showtune styles, a taste of jazz, but as a whole I just don’t really get it. While I’m happy to enjoy the unknown, for I do love this album, I would be grateful to hear from those who can enlighten the mystery that is Song Cycle.

One could accuse Van Dyke of the Paul Simon treatment (trade South Africa for Trinidad), but I find this record’s approach more original and less exploitative. The album opener echoes that of Song Cycle‘s, an intentionally degraded song clip, “Jack Palance” performed by the [[Mighty Sparrow]] himself (those interested in exploring more calypso through this angle might investigate Mighty Sparrow’s Hot and Sweet, an album produced by Van Dyke Parks in 1974). Wooden marimbas, steel drums, island rhythms, and other calypso staples (supplied by the Esso Trinidad Steel Band) grace many of the tracks, but Parks maintains style thru vast string arrangements, orchestration, gratuitous experimental bits, and the vintage Americana themes examined in the lyrics.

Parks reimagines and rearranges traditional material on Discover America, as well as borrowing two killer tunes from Allen Touissaint (“Occapella” and “Riverboat“) and Lowell George’s “Sailin’ Shoes” (Little Feat actually performs on Park’s “FDR In Trinidad”). The adapted material is brilliantly produced and addictingly melodic. Couple of standouts include the lilting “John Jones” and mind boggling “G-Man Hoover” (a tune as weird as it is captivating), though the entire album is consistently 5-star. A masterpiece from a master. words/ b mcgrath