Here at AD, we started talking it through and decided we weren’t going to add to the cacophony of lists being put out by various music pubs. There are enough of those. Since the beginning of October, Monday through Friday, we have been featuring posts detailing our favorite albums of the decade. Now with two weeks left in the last year of the first decade of the new millennium we are ramping up–highlighting our absolute favorites. 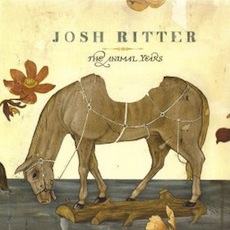 One of the finest singer-songwriters wholly of this decade, Josh Ritter hit a lyrical and musical stride with 2006’s The Animal Years. The darkest and most reflective of his five albums, its twinges of hopeful (and hopeless) melancholy were a stark reflection of the time period in which they were written – when ongoing war and the ongoing administration seemed to have put the world on edge.

Opener “Girl in the War” is quite possibly the best song ever written by Ritter, a metaphorical examination that dances inside the literal – of the horrors of watching a loved one in a misguided conflict. The album’s opening line, “Peter said to Paul / ‘you know all those words we wrote / are just the rules of the game / and the rules are the first to go,'” measures out, in Ritter’s resigned vocals, the dolor of the themes to come.

The images that haunt the record are a concordance of American characters, places and art – Laurel and Hardy; Cairo, Illinois; Huck and Jim; wolves; professional wrestlers; “Swing Low, Sweet Chariot.” Many of these make multiple appearances, and it’s this looping of symbols that shows a thoughtfulness beyond the surface. All of it builds towards the album’s climax, the bombastic and heady “Thin Blue Flame,” a nearly 10-minute piece without a true chorus to speak of, but rather a series of rambling, caustic words and rushed delivery that seems to be teetering on the edge of a seething uncertainty. The sighing “Here at the Right Time” is the most appropriate thing that can follow, winding the album down in its longing and hopefulness, even if it seems unsure about everything and anything.

The album is not without its bright spots, but they come, as most of life’s great moments do, as merely brief respites. “Lillian, Egypt” is a classic Ritter jaunt, characters dancing across a silent movie screen in a song that plays, maybe not so coincidentally, like a condensed version of Dylan’s “Lily, Rosemary and the Jack of Hearts,” another song deftly placed on a heavy record to lighten the load. “Good Man,” too, lifts the heaviness of the album’s themes on its back, and it’s this splendid timing of more uplifting moments that makes The Animal Years, at times, a deceptively lighter record. But the album’s heft is there, making it a record that rewards more long-term listening. It’s no wonder that Ritter would follow it up with 2007’s much more sprightly and raucous The Historical Conquests of Josh Ritter.

The Animal Years is a daunting record if taken seriously. It’s easy to overlook its burden and coast along its surface, finding nothing but an enjoyable modern folk album, but its true insight is in Ritter’s words, backed up superbly by the instrumentation which never overwhelms or undersells its lyrical charges. As a document of the darker internal moments of this decade, it has few peers. words/ j neas