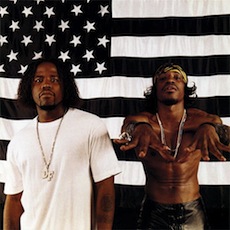 We don’t typically do hip-hop around here. Privately, yes, but on AD, much less often. (Though the occasional J5, Roots or Tribe may pop up from time to time.) Nevertheless, Stankonia isn’t *really* a hip-hop record anyway. Hip-hop-like? Yes. Definite hip-hop moments? Of course. But it’s closer to an R&B rock record delivered from one of the more creative and talented duos–hip hop or otherwise–of the last 20 years. My natural and unavoidable Atlanta hometown bias notwithstanding, Outkast’s Stankonia is a tour de force so undeniably strong that to omit it from a practice such as our Decade endeavor would be a travesty of incredibly dishonest proportions.

To arrive at the heart of Big Boi and Andre 3000’s genius, you’d have to first realize that Stankonia, the group’s fourth LP, is actually their fourth-best LP, after their impressive ’90s trifecta. And it’s still that good. Outkast’s progression from its more traditional hip-hop roots over the course of four records–Southernplayalisticadillacmuzik, ATLiens, Aquemini up to 2000’s Stankonia–marks an advancement of a entire genre riding, for a time, almost exclusively on the backs of two guys from East Point. They left everyone else trying to catch up. Indeed, through all of the East Coast–West Coast, NY-LA rap battles during the late ’80s and early ’90s, Outkast managed to be the torchbearer that would carry the (arguable) hip-hop capital down South. At each step, their recordings defied and transcended the current mood and atmosphere of the genre. By 2000, Outkast’s transmuted brand of hip-hop-R&B dance rock–a far cry from its predecessor Aquemini–was in so many ways a departure from hip-hop at the time, and from the group’s previous work, that current hip-hop influenced by it may make us forget how amazingly new and fresh it sounded.

“B.O.B.,” “Ms. Jackson” and “So Fresh, So Clean” highlight a relatively lengthy (73+ minutes) navigation through what seems like every influence Andre and Big Boi could identify. Even as those singles are closer to traditional, they aren’t exactly. (To wit, can you actually say “B.O.B.” is *more* hip hop than rock?) And then you figure in something like “D.F. (Interlude),” which features a closer-to-home freestyle, but dubbed over a meandering art-rock percussive sequence. Possibly most important, from a pure rhyming/rapping standpoint, Outkast remains relatively true to the core of hip-hop as an urban poet movement. By the late ’90s, the early poetic rap credo of overcoming less-than-desirable life circumstances and surviving–a credo that actually meant something positive, despite narrow-minded critique simply because rappers were wont to say “fuck” every so often–had been contorted to a meaningless and silly celebration of excess, not unlike what happened to popular rock in the ’80s. Granted, groups like The Roots were putting out sophisticated subject matter around the same time, as with 1999’s superb Chinua Achebe-nodding Things Fall Apart, but generally speaking, so-called “smart” hip-hop struggled to resonate with anyone other than true rap aficionados or more artistically inclined non-rap listeners.

Stankonia, however, managed to be just as lyrically smart–if not smarter–than something like The Roots, but it did so with such a head-spinning blend of music and production that the visceral response shot through the heads and dancing legs of all manner of music audiences, previous tastes no matter. So, this isn’t simply a token hip-hop pick for a rock blog or a bandwagon handshake of every other decades list out there. This is simply excellent music–whether it’s hip hop, rock, R&B, dance or all of the above. And excellent music warrants much deserved appreciation. words/ j crosby