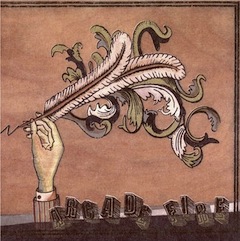 It’d be easy to peg Funeral a death processional. People have done it before. Nearly every time anyone ever talked about the record, in fact. I never read the liner notes to the album, but apparently they mention the death of three family members of the band, and their inspirational impact. And then, of course, there’s the album name, so coldly explicit, or so we would be made to think. But the Arcade Fire’s full-length debut isn’t so much about death as it is about life.

Specifically, perhaps the record is actually about adolescence or near-adulthood, with we as growing creatures seeking independence and trying to figure out what to do with it when we find it in small doses. Or maybe it’s more universal than that, and it confronts the same basic human anxieties that we all feel at nearly any age. Those anxieties that first ever hit us when we’re reaching the coop-flying age, but before our downy lining has been replaced with primary feathers, even if our heads think it already has been. When Win Butler bears his way through “Neighborhood #1 (Tunnels),” he’s begging for escape, at first maybe from a home fraught with friction, but really, we find later, from a home he’s outgrown. As what happens when we grow, his world has become his own–not his parents’–with a partner, in this case a girl, with whom he’d rather flee and be alone than face a reality that he feels is no longer his to face.

The youthful refrain endures throughout, highlighted by the nebulous “neighborhood” song titles, as though the front half of Funeral is a series of streets which are navigated on foot, cutting through backyards, under fences and behind houses, discovering a new stretch of land that’s incredibly near but feels so far from home. The energetic and cheek-chapped pace of Funeral is like a sprint through the cold dusk, racing to get home or possibly far from it, as the world whisks by in the periphery. Slightly damp with sweat and equally cool, it’s growing and moving. Amidst the cold, it’s insouciantly triumphant, or at least, it’s pursuing triumphant moments, no matter how small and whimsical they may be. Funeral’s orchestral composition is necessarily grandiose is size and ambition, as it should be for weighing itself against such themes. More remarkable than its size, though, is its precision. Some dozen or more instruments appear at various moments, six played by Butler himself and six by his wife and co-songwriter Regine Chassagne, but it never sounds overplayed. Quite the opposite, it’s melodically on-point and feels almost spare despite its baroque textures, like a swirling gust that topples trees but can’t be seen.

As that kind of big, theatrical rock goes, such a loud endeavor often leaves us with an equally loud and, subsequently, warm feeling. While Funeral is certainly loud at times, the feeling it leaves isn’t a warm one, but rather one of isolation. And that’s not a bad thing. In that way, I’ve always likened Arcade Fire to ’70s-era Bruce Springsteen (and not because of Butler’s Boss-like voice on Neon Bible). At they’re core, they’re about living. They’re about survival. Maybe the tone is different than Springsteen’s blue-collar rock, but the idea is much the same. And survival is a solitary and isolated endeavor, much as it is a positive one. And maybe that’s where Funeral, as a word or idea, finally comes into play. This isn’t about someone confronting death so much as it is about someone–someone young–viewing the end, somewhere down the line and whatever form it may be. The naiveté of childhood is behind us, and we’re finally able to have some perspective on what lies ahead: not death, but the pursuit of a life actively lived. words/ j crosby