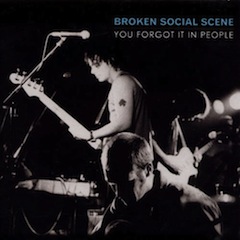 As Justin said in his Decade entry on Sufjan Stevens’ Michigan, some albums feel intrinsically linked to the experience of listening to them.   Maybe it’s a romantic sentiment, but music works like some aural madeleine, carrying dense and indulgent sensory memories that go deeper than the textures of the notes and melodies and into some–well, okay, it is a romantic sentiment, but if we’ve all brushed off romance, then we probably already don’t like Broken Social Scene.

For me, there is no record this decade more evocative of time and place — chronological time in my life and geological place in the world — than Broken Social Scene’s beautiful You Forgot It In People.   I’ll spare you the details of my life, but only because I imagine it’s a pretty common story for music lovers: I went to college, I   found people like me, and we listened to this album.   You Forgot It In People will forever sound like 2004 in Baton Rouge, LA, at 3 in the morning.

It feels appropriate that I associate this album with friendship more than I do any other.     The core of YFIIP was crafted by a group of ten musicians and their closest friends, including members of Do Make Say Think, Metric, Stars, and Feist.   For all their grandeur, Broken Social Scene never feels like anything more than a bunch of people playing around together; these songs are more inclusive than their indie cred suggests.   Those could be your hands clapping in “Stars and Sons”; that could be your duet in “Almost Crimes”.

And even when they weren’t singing with you, they were at least singing for you.   Album centerpiece “Anthems for a Seventeen Year-Old Girl” distills teendom down its mantras (“Park that car / Drop that phone / Sleep on the floor / Dream about me”); Emily Haines’ processed vocals are as fragile as the lyrics suggest, carried along on gently rolling banjoes and strings, those same four lines repeating and gaining — rather than losing — meaning as they go.   It’s maybe a cheap trick, using violins and emotionally sticky memories to flesh out the song’s emotional core, but I don’t care; it worked when I was eighteen and it works tonight, too.

But that’s not all it sounds like. You Forgot It In People came out in 2002, right as file sharing’s bubble of secrecy was beginning to burst.   It seems odd to say today, when every promo disc that leaves a label office ends up online, but You Forgot It In People was impossible to track down if you lived in a small suburban town.   That inaccessibility, when coupled with the group’s then-bizarre bio (Canadians?   Making music?   And there’s twenty or so of them?) made it one of the last truly mysterious records to come out this decade, the kind of thing people knew they wanted before they actually knew anything about it.

You Forgot It In People probably could not have been made anywhere but in Canada.   Sure, the guitar noise behind “Stars and Sons” and “Cause=Time” maybe bite a bit of J Mascis’ Western Mass muscle, but BSS can’t help but shape all of that into something pretty, something romantic and friendly and — well, nice.   Elsewhere, the vibes and horns of “Pacific Theme” get all mod and round, the song’s curves gently easing from wide-brushed lines into glittering fractals.   “Looks Just Like the Sun” flips the song inside out, showing us the architecture (“Come in after this”, the producer instructs a musician).   The physical piece of plastic may carry a legacy, but all of the mystery ends the moment you hit “play”; we all get to be in on this together.

Somehow, in some way, all of these disparate parts yielded a sonic Canada in my mind, as if the music were the phantom limb severed from Montreal’s borders.   At least, that’s the way it sounded to me when it came out.   Something about it always suggested snowy French Canada, a haven where people stay up late and make art and just sorta and get along; a house show that never ends.   Obviously, there are huge and illogical holes in the way I feel about this album–not the least of which being the fact that Broken Social Scene are from Toronto, not Montreal–but it doesn’t really seem to matter.   I still get it.   words/ m garner