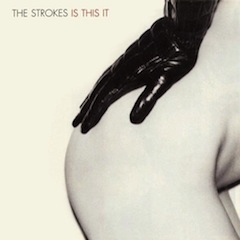 There could be a lot to resent about the Strokes before ever listening to their music. A bunch of wealthy, well-traveled prep-school kids from Manhattan hit a bit of luck and became an overnight sensation. The money, the pedigree, the luck — all potential sources of envy, cynicism and ire for an everyday Joe like you or me who may feel, at times, short on all three and who may wonder why good fortune seems to be bestowed on those who already have it by the truckload. But that’s all before you listen to Is This It, and most likely you probably didn’t know most of that anyway when you first heard it.

My first introduction to the band was by way of their video for “Last Nite” featuring the band kicking around a soundstage reminiscent of the bygone days of television programs where the guest musicians might’ve been the Monkees or the Carpenters, or a maybe a young Mick Jagger, bangs and all. (Its haloing, intentionally low resolution led me to believe it might be the start of a Mentos commercial. Seriously.) But by the end of the video, I was scrambling to buy the record. I wasn’t alone. Labels reacted similarly, as “Last Nite” leaked/teased ahead of The Modern Age three-track EP, which ultimately ignited a bidding war that resulted in the release of Is This It on RCA.

Even now, “Last Nite,” as familiar as it is, feels simplistic. It’s short, to the point, rough and free of any layered production effects. The album, of course, is much in accord, and it’s this that makes it difficult to describe the Strokes’ immediate and lasting impact on the decade, and likely far beyond. Because how can something so small be so big? Shakespeare says “brevity is the soul of wit,” and so too, may it be the heart of music.

On Is This It, time isn’t wasted talking around the subject; conclusions are arrived at immediately. If the Strokes were writing a review of their very own record, it might be a three-word sentence. The content doesn’t venture very far into adulthood, but it doesn’t need to. Its direct and naked message is actually remarkably mature, in the way that a 20-year-old might be uncomfortable talking about sex, but later on in life, it can be discussed without a snicker or brash slang to veil discomfort, simply because there isn’t any. Like sex, a full range of emotions are addressed here, a range–angst, defiance, lust, jealously–that hits at a certain age of self-discovery. They’re emotions, like the record, that are simply stated, but arduously defined. Take ennui, whose flagship, Is This It, serves as the title track of the record and a can-kick to its sidewalk pace. There’s a question mark capping that statement in the lyrics, but not so in the song (or album) title. And that’s possibly the height boredom or acknowledged futility, when there isn’t energy or want enough to do more than state with a sigh, not even question. But lest we digress too much into the exploration of an early-20’s psyche that astutely resonates with a much broader audience, the brand of rock and roll here need also be discussed, since the Strokes highlight a rebirth of garage rock.

Garage rock was born in the ’60s and ’70s, and endured throughout the years. So, the Strokes can’t really be credited with doing something entirely original. But they did manage to draw public attention once again to a genre defined by fuzz and distortion, the illusion of imperfection; “raw efficiency” as lead-singer Julian Casablancas called the band’s one-take recording style. The sound, though much alive in countless forms before them (even relatively popular ones), still dwelled primarily in basements and small, gritty music venues, the lo-fi temples of indie rockdom. Since 2001, though, distortion has become an aim of many a talent, large and small. It’s as though an entire generation of aspiring musicians saw the Strokes and realized there was an influence that had been much neglected in the ’80s and ’90s. So, it’s not that the Strokes are necessarily singularly influential. It’s that they, more than anyone the recent history behind them, reacquainted the music world to amp static. The ’70s are still the influence, but the Strokes were for a time, their vessel.

The garage sound is about the only thing that could adequately convey they same raw experiences that they sing. It complements the words like music aids a memory. That sort of thing knows no barriers, certainly not socioeconomic happenstances like a wealthy upbringing. And sure, a little luck may have been needed to get noticed, as even extremely gifted musicians require heaps of it. But at the end of the day, Is This It is simply a great rock and roll record, an opening chord on the 21st century soundtrack, and we’re damn lucky that it’s there. words/ j crosby