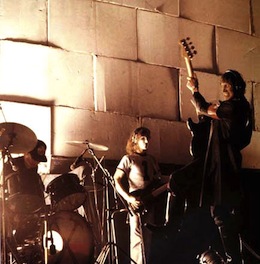 The Wall. Bloated and self-indulgent, yet near perfect in its execution. Though I was only 4 years old when Pink Floyd first executed its extensive stage show in 1980, the concept album’s legacy began to pervade my consciousness as soon as the beginning of middle school.

It was then that I first began noticing the Wall‘s bricks carefully stenciled on the notebooks of the upper classmen; the album’s nightmarish iconography emblazoned on t-shirts, stickers and half-sewn jacket patches—and of course the cardboard CD jewel cases (remember those?) that clung to the inside of rusting metal locker doors. These middle school upperclassmen, which to clarify meant 8th and 9th graders, seemed to be tapped into something…some otherness, something called Pink Floyd.

With the Wall, came the first sense of rebellion…escapism. A break from the suburban norm of Atlanta. Sure it was a band from another generation but what it signified was a good deal more interesting than the top 40 of Madonna and Wang Chung. And really, thinking back it wasn’t even so much about the music (as I’m sure I barely grasped the majority of the content of Roger Waters lyrics), but the promise of an, err, less conservative worldview.

A gateway, this was a world of beers salvaged from basement refrigerators and cigarettes pilfered from your friends mother’s pocketbook, both consumed behind the school parking lot and/or in the woods behind a church or shopping center. This was a world where marijuana was smoked out of bent coca-cola cans and makeshift tin-foil bowls. This was the beginning of sneaking out of the house at midnight and returning home before dawn. Heady stuff for a thirteen year old. Whatever this middle school subculture was, I wanted in. Far removed from Pop Warner football, this, the Wall, as I understood it at the time, was a glimpse of something else. Something far removed from the suburban drudgery of being thirteen in 1989.

And then I discovered Black Flag and Minor Threat. But that’s a story for another time.

That was 20 years ago. I have since gone through many phases of Pink Floyd fandom, from utterly denouncing them and their ilk (see Black Flag reference above), to championing founder Syd Barrett and everything in between. If you haven’t seen it yet, Mojo has taken another look at the Wall’s uncompromising 1980-81 live show revealing everything that went into making it a reality. In addition to interviews with its creator, Roger Waters, the magazine goes behind the scenes talking to the production crew, stage band, hangers on, etc. To commemorate the issue the magazine has curated a two-disc compilation, The Wall Re-Built, inviting contemporary musicians to each cover a track from the Walll. Sample a couple of tracks below. Sweden’s the Amazing slow the raucous “Young Lust” down to a piano-driven dirge, while Gnomonsong’s Papercuts employs fuzz and dreamy dissonance on “The Thin Ice.”

In 2010, I wonder if this album still grabs the imagination of thirteen year old boys the way it did in the days before the Internet. The days before endless “free” music, movies, etc.