Hailing from the Niassa province of Mozambique, singer-songwriter Feliciano dos Santos is little-known outside of his native country, despite receiving praise from the likes of the New York Times, PBS, the Guardian and the BBC. His band, Massuko, generally sings in three regional dialects, Yao, Nyanga and Makua, and occasionally in Portuguese, the country’s official language. The music drifts through rhumba, reggae and various provincial folk elements. One of Massuko’s biggest successes is a subtle but powerful acoustic folk tune called “Tissambe Manja,” where an easy, sun-setting intonation conceals something decidedly heavier. Its emotional strength is exerted by its simplicity, a characteristic readily felt even without the benefit of translation or meaning. But when meaning is applied, our perception of it might change.

“Tissambe Manja” actually means “Wash Your Hands.” It’s a song about cleaning up after using the bathroom, with lyrics as simple and straightforward as the title suggests. Taken literally, the song has power for the occidental listener only in context. In English–“We wash our hands / For the children to stay healthy“–it wouldn’t necessarily resonate with our life experiences. It wouldn’t touch on our insecurities or emotions. We would also recognize it for what it is: primarily, a children’s song. Within the context of Africa’s severe hygiene and sanitation deficiencies, its initial, untranslated strength might be replaced by something more defeatist, something like empathy. This belies our pursuit for meaning: that somehow “Tissambe Manja” has greater potential to move us when we can’t understand a word of it. Because “understanding” can sometimes get in the way of “listening.” That’s true of any music, but it’s a particularly cumbersome proposition with something like African music, when our primary interpretation is devoid of the explicit lyrical intent proffered by our native tongue. The meaning of the thing has to then come from a different place, a place other than our heads. 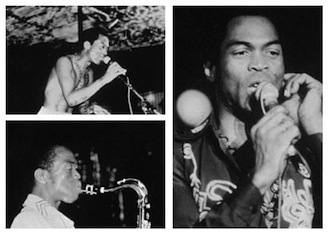 This brings us to Fela Kuti, the de facto face of African music. Since a few years after his death, his immense catalogue has seen a renaissance in the western music collective, probably making him more popular than ever. This Fela glut is evidenced nearly everywhere. Jay-Z, Will Smith and Jada Pinkett Smith have produced the Broadway production Fela!--it alone a vibrantly loud glorification of the man. Knitting Factory Records is in stage one of an expansive remaster/reissue of his life’s work, recently releasing the palette-whetter Fela: The Best of the Black President (a two-disc repackaging of a former hits record). In the coverage of nearly *any* music from Africa, Fela for some reason bears at least brief mention most of the time (even when his only association with other forms is an incredibly massive and intricately diverse continent of origin). We intently monitor each new Fela-related endeavor and even retrieve his old documents for reinterpretation in an exhaustive reprise of the man’s remastered life. The catch then is that critics and listeners of all stripes will believe they’re forced to make new discoveries in his music, uncover previously overlooked nuances, knowing what we know about him. We will try to once more understand his music within the context of his life. But again, trying too hard to understand something can encumber our ability to listen to it.

In review of this Fela rediscovery, someone recently said that it “seems like his contributions to music in general are more interesting than actually listening to his music in specific, or that the sum of his work is more exciting than any particular set of songs.” And unfortunately, that’s what this whole cause célî¨bre–Broadway and reissues and reacquaintance–is roughly doing. Well-intentioned as they may be, Knitting Factory’s greatest hits precursor has even positioned it accordingly; as if the Fela newcomer might understand or be prepared for his 45 albums of specific experiences through a sparse two-disc collection that, by definition, would aim to generalize his work. It’s trying to add general context to a work in specific. Thus, it modifies the precise feeling of a singular work, be it a song or a set of songs. This is not unlike the modified, contextual experience of “Tissambe Manja,” where a song’s evocative and personal textures can be replaced by a vast socioeconomic cause (like sanitation). It still conveys a feeling, but now it’s less personal, more conceptual.

The macroscopic view of Fela’s musical contribution indicates the life of a powerful protest singer. We are told that he changed his middle name in symbolic defiance. We are told his songs were pointed attacks on his home country. We are told how he was beaten by soldiers, how his mother was killed, how he delivered her coffin at a general’s doorstep, all at the height of his career. These are not unimportant facts. Quite the contrary–they’re incredibly significant. Like understanding that dos Santos’ band Massuko is really an offshoot of his nonprofit, Estamos, which aims to promote sanitary conditions across his country; this context does become important. But it also generalizes the sentiment of a song. It forces us think about a broad motivation while trying to experience a specific few minutes in music. Good for a biography. Bad for a song. This isn’t what the creator intended; it’s a consequence of hindsight.

Through Fela’s revival, a world of music has opened up to a new generation of listeners and creators alike. An outfit like Soundway Records now has a platform on which to sell–successfully–compilations like the Nigeria Special series, Ghana Special and Ghana Soundz. Similar regional compendiums have also been well-received–the massive Ethiopiques volume, now sitting at 23 releases, notable among them. And it all points back to Fela–not always for its influence, but for its broad acceptance. He was a pioneer for the continent, that much is certain. But he is also a contradiction of circumstance. Educated, well-heeled and well-traveled, he is precisely the opposite of the vast majority of African musicians. Fela Kuti is not Feliciano dos Santos.

Ironically, our treatment of Fela’s career in scale indicates in many ways our perception of African music in general. He is from one country in a continent of 53. His traditional inspiration, highlife, spawned from a relatively small region of West Africa, and it’s just one of hundreds, if not thousands, of distinct communicative music and dance forms across the continent. (And add to it the convoluted soup of African diaspora, where African-inspired western music–jazz, blues, reggae, Caribbean–is generations later inspiring African music–afrobeat, Kwaito, et al.) With an estimated 2,000 African languages, Fela often used a form of pidgin English as a necessary means to grow beyond his regional confines, still only comprehensible to a small continental fraction. Yet in spite of all of that, we still often assign his identity–musical and historical–to the whole of Africa. As western consumers, we are typically ignorant of the incredibly nuanced diversity in the continent. Everything becomes “afrobeats” when only a small fragment actually is. And as western consumers, we are typically ignorant of the specificity of Fela’s work, where we focus on his biography without experiencing the very unique triumph of an individual song.

In both cases language and cultural barriers are at work. Attempting to break it down requires us to focus on labels, categories, very unsubtle, absolute and immediate references. It transmutes a unique, personal interpretation of music to a borrowed relationship of ideas–war, peace, death, politics, sanitation. It’s making cerebral an incredibly visceral thing. We don’t arrive at subtlety by trying to digest a history of facts. We arrive at subtlety by going in cold and coming out informed. Trite as it may be, if we take our heads out of it and let the music move through us, that’s when it speaks to us; that’s when it permeates a more tangible awareness, when the subtlety reveals itself, when it becomes distinct. Not through applied translation or meaning, but by simply letting the music happen to us. And I’m not even talking about Fela anymore. words / j. crosby