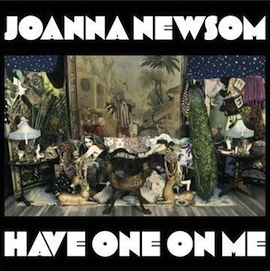 Listening to Joanna Newsom has always required certain things: patience, trust, an ability to overlook cosmetic flaws in favor of the more complete picture, more patience. Her precedent releases–2004’s Milk-Eyed Mender and 2006’s Ys–required these virtues in increasing numbers. But Have One On Me, her new Victorian triple-decker of an album, is asking for a much longer commitment.

Commitment being the key word. It’s unfair, really, to judge Have One On Me the week, the month, and maybe even the year of its release. Newsom is an artist of considerable talent and intentionality: Have One On Me is as carefully built as Bleek House, and takes as much long-suffering to get through, much less appreciate and critique. There’s so much happening here: narrative lines about man and God and law and love and death weave and block one another throughout the album’s two hours and three discs, fitting together into something so, well, so big that it’s going to take the truly committed at least a good nine months just to determine what, exactly, Newsom is trying to do with Have One On Me, and whether the thing holds together at all.

But is it even worth the attempt? There’s no virtue inherent in releasing an album that takes two hours to listen to, and I’m not sure that Newsom should be lauded for the length and ambition of her creation any more than Merriam and Webster are for theirs. The question, the real question, and it seems almost unfair to ask, is whether Have One On Me can justify its own existence.

Continue reading after the jump….

To answer that question, we have to go back to that list of virtues at the top of the review. When I say that this record requires patience, I don’t mean to say that it’s tedious, or a chore of some sort. The kind of patience required to appreciate Have One On Me is the same kind required by love–whether it be filial, erotic, or divine. Have One On Me must be allowed to spread itself out in your listening room. It must be given its time, its space. It must be listened to in order. It will not bend to your will. (Believe me, I’ve tried.) If you try to squeeze it between YouTube videos, it will not love you. If you try to listen to it while you commute, it will not love you. If you put it on in the background while you type up your notes, it will not love you. Much like the lovers Newsom describes across her album, it will only love you if you give yourself up. If you can do this, you will find a spot at the feast.

You might be thinking that I haven’t said anything at all about the music. This is not at all true. Because Have One On Me the album is entirely dependent upon Have One On Me the experience; the two go hand-in-hand, and it’s perhaps Newsom’s greatest artistic achievement that an album whose songs seem to be about love and trust requires nearly as much love and trust from its listeners. By asking us to sit down in our seats and pay attention while she unfolds herself and her heart before us, we are put in her place in the narrative. We, too, are waiting, and we wait with her, and we begin to understand–sometime around the beginning of disc three, I believe–that waiting can be a challenge.

Not that Have One On Me is dull. “Good Intentions Paving Company” has rightly been tagged as the album’s standout, with its loping piano runs, cooing choruses, and jazzy trombone coda. Pitchfork’s Grayson Currin labeled it Newsom’s most humanizing song, and is right to do so; though the lyrics concern themselves around sailing ships and seacoasts, they somehow manage to center themselves around love and joy and surrender, and the thump of the rhythm keeps us right there with her until the end of the song, when the clacks slow down and we realize that love is about surrender, Newsom purring “And I do hate to fold / Right here at the top of my game.” Currin and others have fixated on how fresh the song’s sentiment feels, and they’re right: when else has a pop song admitted that falling in love with someone or something isn’t a decision swiftly made but a process, and that the temptation to look back abounds even in even the most loving relationships? “Allelu, allelu / I have died happy,” she sings on “No Provenance,” the following track, and it’s fair for her to sing praise: the temptation to know what-is-not-but-could-be-if has passed.

Despite its length and breadth, Have One On Me is arguably the least ornamented of Newsom’s records. Van Dyke Parks’s lavish orchestral touches guided Ys along gently. They unspooled with the filigree of Newsom’s lyrics, guiding twelve minutes of harp plucking past us unawares. Ys practically tricked us into maturity. Have One On Me, though, is more understated, and while its mutes feel more appropriate on a song-by-song basis (notably disc three’s birthing song “Esme”), the entire project could have stood with a bit more outside guiding. Somewhere around the end of disc two or the beginning of disc three, the songs begin to melt together, and the sentiments begin to run dry. The songs are still independently good, but the examination has grown stale. The moments work as moments, but we no longer have the strength to appreciate the scope. And so Newsom ends her album with two endings: the Book of Revelation-talkin’ “Kingfisher” suite, and gospel breakup track “Does Not Suffice”. And while both songs seem on their surface to be about destruction–the end of the world, the end of a relationship–Newsom spins them both into songs of creation. With “Kingfisher”, the travail is over, and new life goes on; with “Does Not Suffice”, the singer, who has given herself entirely over to an emotionally absent lover, moves on. There is something deeper going on here, some adjusting of the way the lamplight hits our eyes.

I’m one week in to Have One On Me. I can’t tell you if it’s a colossal achievement, or an epic failure. I don’t think anyone will be able to for a long time. But what I can say is that it’s well worth your time, well worth your exercise, to try and give it what it wants. And the rest will have to take care of itself. words/ m garner

8 thoughts on “Joanna Newsom :: Have One On Me”