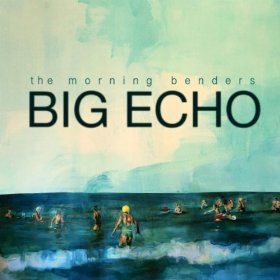 Big Echo is a well titled LP. For a band so clearly indebted to the sounds of the echo chamber of a particular branch of rock and roll, it is honest and forthright nomenclature. The Morning Benders, only now two albums into their career, have crafted a subtly charming album that at once fully involves the sunny, complex pop of the 60s along with fractured neo-psychedelia and the loopy, loping indie-rock of Pavement.

Embedded within Big Echo‘s sound is a rich mixture of modernity and classicism. The record opens with the sound of vinyl pops and cracks – not an original idea in the digital age, but certainly reflective of the album’s mindset. Opener “Excuses” has a piano-driven Everly Brothers harmony to it that wanders through a field of percussion and strings. “Wet Cement” channels the thrumming, floor-tom driven balladry of the Beach Boys. Even the songs that aren’t so obviously swimming in style are tinctured with moments of such – “All Day Daylight” and its sugary, absurdly catchy chorus, for one.

It’s these such moments that echo the neo-psychedelic sounds of Elephant 6 and even the Paisley Underground. The natural next step comes in on songs like “Pleasure Sighs,” an analog-warm track that crackles, hums and woozily wanders along its running time in something that seems pulled from a lost, incredibly coherent Olivia Tremor Control album. “Hand Me Down” gives the bracing, lo-fi classic pop—that has lately been running rampant—a clear competitor.

It’s always a bit dangerous to lay out so many comparisons for a band, as there is a chance readers will look at the album as adding nothing new to the conversation — but Big Echo is not only a record worth the initial spin, it warrants repeated listens. While its title may not be a purposeful comment on the album’s tendency to capture so much great pop music in its structure, it certainly speaks to the album’s quality as a piece of work that seems studied and absorbent in the best possible ways. The Morning Benders are creating a legacy worth engaging, and it speaks volumes for the way their music represents and evolves its obvious influences. words/ j. neas