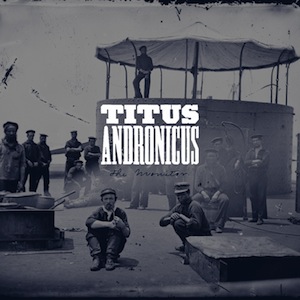 Buried somewhere in the hour-long rubble of buzzed guitars, martial drums, shredded vocal cords, unsuspected string sections, skronking sax solos, and, uh, bagpipes that form NJ suburbanites Titus Andronicus’ second full-length record is a smart, smart album that’s sorta about how being smart doesn’t really count for shit. The Monitor, ostensibly named for the Union ironclad that tore apart the CSS Virginia in the Battle of Hampton Roads (but, really, probably, named more for the self-loathing, self-conscious way we can’t stop staring at ourselves), finds Patrick Stickles and his gang of recovering slackers fighting their way out of existential crises and mid-twenties angst with spoken-word help from Vivian Girls, Ponytail, and Craig Finn. Finn reads a passage from Walt Whitman’s “Vigil Strange I Kept on the Field One Night”, a poem about (among other things), two soldiers’ meeting one another in the dim red glare of war, connecting as two humans in anonymous suffering; one soldier dies, and his friend buries him where he lays.

Consider in Titus Andronicus the bursting of the bombs and the dead on the field and also the hands outstretched towards one another. Wailing harder and smarter than they did on 2008’s The Airing of Grievances, Titus barrel through stacks of songs, pulling out punk mini-suites and building structures that soar at E Street levels, though not without letting self-consciousness tear down what it can; “Half the time I open my mouth to speak / It’s to repeat something that I heard on TV / And I’m destroying everything / That wouldn’t make me more like Bruce Springsteen,” Stickles hollers in epic closer “The Battle of Hampton Roads,” and he’s not smirking while he shouts. It’s the tension between self-consciousness and the desire to exist freely–even if that means being a little bit more like everyone else–that pilots The Monitor’s rocky listen.

This is supposed to be a concept record, with a story about a New Jersey ex-pat living in Boston, but the threads are tough to connect. If there is a concept here, it’s not a story so much as it is as motif: The enemy is everywhere. It’s shouted over a thick I-IV-V in “Titus Andronicus Forever,” skanked about in “…And Ever,” and implied everywhere else. It lurks, somehow tying itself through Mahwah, Abe Lincoln, Union fight songs, Satan, college girls, existentialism–references not surprising (from Titus, anyway), but not stale, either. It’s almost terrifying how easily Stickles seems to pull all such pathos out of all of these things and a thousand others besides; at times it’s as if he’s held his microphone up in the air and simply let the post-collegiate despair bump into it. Nobody does angst like Titus Andronicus, maybe because no one else seems to have come to terms with it so well.

But what would make for weepy sadness in the hands of lesser cynics makes here for pretty blistering rock music. These dudes tear through punk clichés with enough conviction to make them matter again, stacking piece after piece together in sprawling songs; “Hampton Roads” is fourteen interesting minutes long and pieces together bits of Billy Bragg, Broken Social Scene, Springsteen, and the Dropkick Murphys. The album’s strongest track, “No Future Part III: Escape From No Future” finds Stickles shouting over a rolling drum and spitfire leads, choking on self-loathing, surrendering his humanity to some beast, some enemy who has taken over his life, something that has moved in when he sold out “the one thing that made me beautiful”: “You will always be a loser,” it whispers to him over gentle keys, though the guitars wait their turn. It’s odd, and it’s touching, and it’s a naked moment on an album full of them, and Titus take the whole thing and build a shouting bridge out of it, stealing back the phrase, repeating it until it becomes a mantra, a flag, a group cheer, until it becomes okay.

This is the real challenge of The Monitor–and, I expect, of being Titus Andronicus–when you stare into the void, do you surrender, or do you piss into it? If you mock the devil, will he flee from you? Do you listen to your own Personal despair or do you dance to the lock-step rhythm? These are the questions Titus Andronicus are asking. Enlisting is always at least less lonely than being alone. At the end, feedback and dialed noise sweep up “Hampton Roads,” and everything ends in the giving up and the giving up is the moment everything starts moving. words/ m. garner

11 thoughts on “Titus Andronicus :: The Monitor”