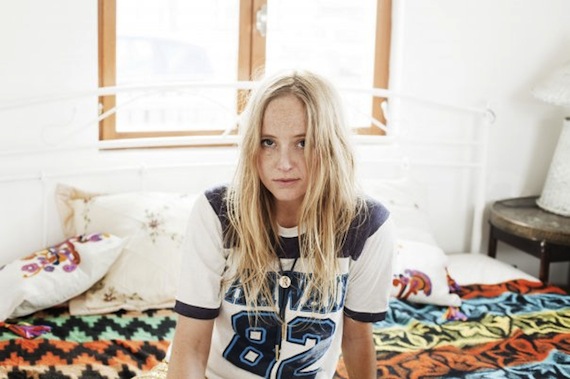 AD: You’ve played five shows already, you’re about to play to five more — how are you saving your voice?

Lissie: Well, the first night, Wednesday, we played two shows and around the second one I was beginning to feel a strain so afterwards I went back to the house we’re renting, drank a bunch of Throat-Coat Tea with honey and lemon, watched some Hulu, got in my pajamas and stayed in, even though I wanted to go out and see bands. I came here to work, not to party. So Wednesday night I took it easy, went to bed early. I played two shows yesterday and surprisingly, my voice didn’t feel that good talking but once I started singing it was fine. And this morning, I was surprised again, I feel hoarse, but once I started singing it was doing what I wanted it to do. I smoke and I drink too much — the best things for my voice are sleep, tea and just being able to rest it — but I haven’t had the luxury to rest it. I’m just crossing my fingers and hoping for the best — I should probably get some tea in a bit here. I don’t know when we’re playing, our shows been pushed back, so I might go back to the house and make some tea and clean my contacts cause they hurt my eyes, change my clothes — just get comfortable. I warm up and I warm down, I’m just hoping I make it through the next two days. I just did this radio thing where I had to sing, I’m talking a lot doing interviews, doing filming.

There was one time when I was in London when I had to sing on the radio after five days of doing show, show, show, show show. I woke up and I couldn’t talk – opened my mouth and nothing came out. I ended up getting injected with cortisone — it felt illegal. It felt self-serving, to have a doctor show up in your hotel and take this big needle and inject you in the butt. “Give me your butt!” and he gave me a cortisone shot and a B-12 shot which was supposed to give me energy. It was amazing how quickly my voice came back and how good it sounded. But, it also makes you fat and I don’t want to get fat. I also had to take Prednisone, cause I get allergy induced asthma…

AD: I take Prednisone a lot.

Lissie: You do? But you’re not fat?

AD: Guess you don’t know me that well. It’s not an addiction or anything…

Lissie: You’re not fat! I have asthma that’s triggered by certain allergies. I’m allergic to dogs but I have a dog and I love dogs — I put my face in their fur and I start choking afterwards. I think I’m allergic to something here — I’m not feeling wheezy or anything though. Long story, I was taking Prednisone, for this coughing asthma thing I got, which went away, but it makes your appetite heartier so I gained twenty-pounds. I don’t want to sound vein, but it was always easy for me to stay thin, like, “I don’t want to take steroids! I don’t wanna get fat!” It’s a terrible thing to say, but I was wondering if I lose my voice here will I have to get injected with steroids, luckily it hasn’t come to that. I wouldn’t do that unless it was super-important, I don’t want to get into a habit. I just need to stop talking so much, quit smoking and just sleep a lot and only come out when I have to perform — but that sounds like a sad and lonely life. But if I can do it for a while, hopefully in the long run it will pay off.

AD: How’s the reaction been? You’ve played a ton of shows in all sorts of places here.

Lissie: It’s been good. I was one of those people who came four years ago just to say that I did it and get the experience. But it didn’t mean much career wise, it was just for fun. This time I’m playing a ton. The reaction has been amazing — I ran into to some people I know from California whom I hadn’t seen in a while and they were like, “Dude, everyone’s been talking about you.” It makes me feel good.

I feel like I’ve taken the route of just being a nice person, working hard, doing my thing, just being myself and there are times when you do that and feel rejected and super-cool people don’t have the time of day for you — like a shitty competition. I feel like I’ve managed to have a good perspective where I just keep doing what I’m doing, I’m gonna do it the “clean” way, the “good” way, the way with integrity. It’s taken longer, but being able to make it that way, but being a normal dorky person, it’s rewarding. But all the people who wouldn’t talk to me years ago are now like, “Oh my god have you heard of Lissie?” and Perez Hilton tweeted about me last night, and Rolling Stone tweeted about me — not that I need their validation but it’s like, “Wow!” So many people are reading that, it might make them check me out. Once people hear me, I think they can respect that what I’m doing is from the heart. Whether it’s their kind of music or not — they can tell I’m not some talentless poseur. I think what I’m doing is honest and there’s skill involved. So yeah, a great response, pretty crazy, but I feel good about all that’s been going on — I hope I can make it through.

I feel like an athlete right now! You know how you hear athletes before the game, “You know, I just hope we have a good game, hope we make it through.”

AD: You never hear an athlete say, “I guess we just brought our B- game.”

Lissie: Yeah, “We tried out best.” Not that I watch many sports — “we went out there, we did what we could.” “Kobe! How was it out there?”

AD: You’re playing here at Mess With Texas with a whole mash-up of bands. There’s a Latin-band on right now, Gwar plays tomorrow. It’s a diverse line-up as opposed to other shows where it might be more in-tune with your music. Is there any additional nervousness performing for people who, while not saying that they’re not there to see you, are maybe into a different genre?

Lissie: I know what you mean — but I just try to be like, this is what I’m bringing, hopefully you can respect what I’m doing. I’ve performed in front of so many different people on tours like Ray LaMontagne and City and Colour — who have a lot of fans from Alexisonfire. So when we opened for them, we had these Alexisonfire sorta hardcore kids there — and they were all coming up to me with their piercings and tattoos being like, “you were so wonderful.” We’d been wondering what they were going to think. Some of our songs are quiet —today we were playing some like that and there was someone rocking out on drums right behind us — so we made a joke about it to play in time to that guy. But you gotta know that people will understand if it’s not perfect — cause you’re just trying to concentrate to hear yourself over the madness. It’s fun, but I want to be professional. I feel like I’m the sort of person who maybe doesn’t have a genre — so maybe there are people from all sorts of genres that can find something they like. Some of our songs are more rock than others, we have this one song that has a reggae beat to it. There might be something for everyone. I feel like everyone likes a good voice and a good song, hopefully you can see past the culture that surrounds it.

I’ve definitely played shows before where I’ve felt like, “What am I doing here? This is so awkward.” Like I was ill placed and badly received but I just laugh at it, at least I’m trying, at least I’m doing it.

AD: What do you hope to accomplish the rest of the year, after SXSW, both personally and musically?

Lissie: Music-wise, that’s really what’s going to take the front seat in my life. On a personal note, I miss my dog, I miss being at home. I’m a nester, I like to decorate my house and cook. If I were at home I’d probably be making marmalade and pies — really trying to grow as a domestic, spiritual person. Even my family, my nieces and my nephew, they’re probably going to change a lot in the next few years and I want to be there for them. My family is being so supportive of me — I’m missing my brother’s 40th-Birthday party tonight and it sucks, but they’re excited for me. Come next week we’re going to England for a month and half, touring all across the U.K. We won’t be home at all, maybe come back for a bit in late April, early May but then we head back to the U.K. for festivals like Glastonbury, back here for Bonnaroo.

I went to the first Bonnaroo, when it was more of a crazy hippie vibe — there was no rules, no law. I ran around barefoot for three days like a weird animal, just in a bikini and some weird shorts and my hair was all greasy and kneaded. I saw all these jammy bands, I saw Ween. It’s just a dream to go back and perform. It’s been a dream to play there and Lilith Fair. I’ve been to them as a spectator and I was like, “I wanna play here!”

Basically, all U.K. until September, my album comes out over there in June so I’m prepping to release that — I want it to sell two billion copies and I want to become rich and powerful (laughs).

AD: What are your shows of choice on Hulu?

Lissie: “30 Rock” I love me some “30 Rock.” Everything about it, every character is perfect. I’d never really had cable or watched TV, but last year I was doing some recording, we’d get done at ten or eleven and I’d stay in. The engineer was like, “Do you know what Hulu is? You should watch Arrested Development.” I watched all of that, fell in love with that, then moved onto “30 Rock” but I had to buy seasons one and two. “The Office.” I love “Parks and Recreation” — I know some people don’t like it but I really love it. I know some people would say that I’m not like that but Leslie Knope and Liz Lemon — these women who mean well and are sweet and a bit dorky — I always feel like that’s just like me! I’m like, “I’m just like Liz Lemon” even though I’m not as funny. “Weeds” — I like the female fronted sitcoms where the lady is strong even if she’s a bit vulnerable and delusional to it. I was getting into “Flash Forward” … and “Glee!” I was getting into everything for a while — I will watch any show. words/ b. kramer

Previously: Lissie :: In The Valley of the Moon