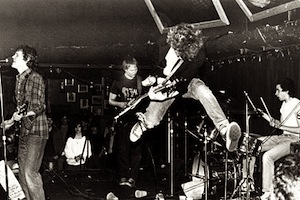 On his third solo record, 2002’s Circus Town, Tommy Womack, former member of the Bis-Quits/Government Cheese, recorded this sprawling paean to the Replacements. The song is full of allusions to classic rock tropes – album titles are incorporated as adjectives, and a full-on Dylan impression erupts at one point. But gently, lovingly, just as all the best stories are told, Womack winds out an Odyssian tale of coming to adore the band that made him “drive home white-knuckle, straitjacket, dumb-ass blind…the greatest rock and roll band I ever did hear.”

Elsewhere: AD’s J. Neas recently guested in a podcast discussion about the ‘Mats over at Uncensored Interview. He and host Courtney Smith spend close to an hour working through the Replacements’ career and discuss the ups, downs, and various hilarious anecdotes of the band. Check it out here.

9 thoughts on “Tommy Womack :: The Replacements”