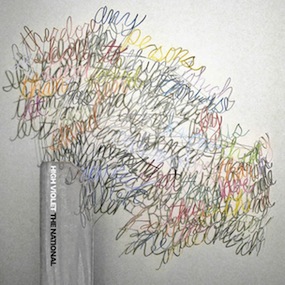 The world in which the five members of The National–and, I suspect, at least 90% of AD readers–live and move and gesture towards being is a wide, wide space with very low ceilings. It is a world in which many things are possible but very few of them provide any kind of lasting satisfaction, and the redlands near the edge of the horizon grow more terrifying, desolate, and unpopulated as they cease to be explored. The freedom to do and fail at anything tends to keep people huddled on islands. At their best–Cherry Tree’s “About Today,” Alligator’s “All the Wine” and “Secret Meeting,” Boxer’s “Fake Empire,” “Slow Show,” and “Apartment Story”–the National trace the contours of these islands of beaten-down bourgeoisie with a hand that is both graceful and judgmental; bomping horns still manage to pierce through dissonant guitar noise, and Matt Berninger’s lyrics, even at their most sorrowful, are very rarely despairing.

So I say with a heavy brow that it seems appropriate–and appropriately disappointing–that at their moment of brightest opportunity, The National seem to have huddled in on themselves, unable to transcend their own nest. 2007’s Boxer broke the group through to a place between the mainstream and the underground previously occupied by The Arcade Fire and The Shins. The record sold 350,000 copies, “Apartment Story” was featured in a Google ad, and, most unexpectedly, the Obama campaign used “Fake Empire” as the score to an inspirational video shown in Mile High Stadium moments before the soon-to-be president officially accepted his party’s nomination. As the New York Times Magazine’s Nicholas Dawidoff points out, the group were poised–and, who knows, probably still are–to release the kind of critical and popular smash enjoyed by an increasingly dwindling number of groups. Rather than push themselves into bright new spaces, though, The National, perhaps wisely, chose to stay at home with High Violet, releasing a batch of songs that stick to what can at this point be capitally-labeled The National Sound: shimmering and distorted guitars, lyrical drumming, and an all-pervading sense of melancholic rage. Dawidoff reports that the group self-revised maniacally, tracking as many as eighty versions of individual songs, many of which were missing lyrics as the band approached their February deadline. What Dawidoff hints towards but never outright says, though, is that somewhere in all of that revising and second-guessing, the kernel of spontaneity–the push of air on which the group’s work glides–somehow burnt away, resulting in an album that’s more effective at sounding like a National record than it is at being a National record.

To be sure, there are moments where the band does push through. “Terrible Love” finds Berninger’s hammered baritone meshing with the high timbre of Bon Iver’s Justin Vernon over Dessner’s trembling guitars, and Vernon’s voice comes out rich as it pours over the National’s cloud, tanging like red wine drunk through a trumpet. Bryan Devendorf continues to prove his position as the smartest, most tasteful drummer in indie rock, and his impeccable sense of timing provides High Violet with its emotional core. Throughout, the group set the soundstage like a tableau vivant; Dessner frees his guitar from the burden of droning rhythm and, along with the rest of the instrumentalists, plays only when necessary. Everything is precise, decided, purposeful, but somehow not dead. The emergent and resurrective ending of highlight “England” strolls the group into laurels, with Berninger crooning, “All the very best of us / String ourselves up for love” in what is the album’s highest moment.

Lyrically, Berninger is walking through the same wide spaces with the same results, but they seem to have made less of an impression on him this time around. The brilliant sideways poetry that has become his trademark seems to have faded in favor of a baggier language, and while the lyrics often sound the same in their non-sequiturs, their ambiguity doesn’t seem corner-folded to the same sense of mystery that occupies Berninger’s thoughts on previous records. He sounds passionate, but he also seems aware of the fact that this ground is well-trodden, both by him and by the very people he’s describing; very rarely do either spin out of the cycle.

To be sure, there are moments of still depth across High Violet, and its success comes and goes with its most deliberately crafted moments. But it lacks the punch that powered Alligator and the majesty of Boxer, and at times seems like a very good set of alternate takes. It’s not hard to imagine that somewhere in that mountain of scrapped tracks, there’s a more powerful take on “Lemonworld,” or a version of “Vanderlyle Crybaby Geeks” that dilates the bursts that the song seems to suggest without ever delivering. There is, though, in some well-appointed Brooklyn apartment, a stack of tapes containing the last and next great National records; it’s slipped through their sieve on High Violet, but it’s only a matter of time before they piece it back together. words/ m garner

21 thoughts on “The National :: High Violet”