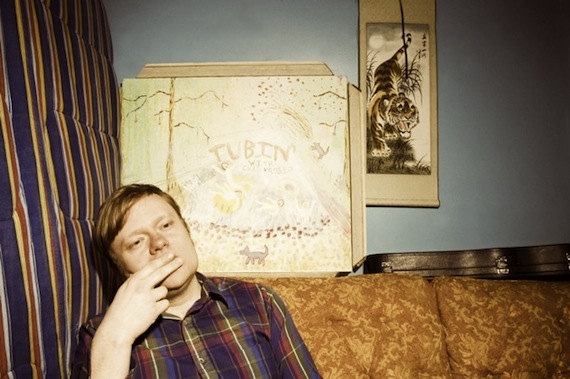 Off The Record is a recurring feature that marries two of my greatest interests; music and travel. Having a locals perspective when visiting a new locale is the difference between experiencing it through the lens of a tourist and of that of a native. Off The Record gathers some of my favorite artists, asks them to reflect on their city of residence, and choose a handful of places they could not live without – be them bookstores, bars, restaurants or vistas. Today we catch up with Frog Eyes’ Carey mercer as he reflects on his native Victoria, British Columbia. Frog Eyes have new LP, Paul’s Tomb: A Triumph, out now on Dead Oceans.

Think of Falstaff: his coarse gut-tunic is stained with mussel juice and pernod, and he is crocked and delirious on some coriander-ed wheat ale, brewed just minutes from where he now holds court. His mouth spews local-lamb gristle and roasted turnip, and his sleeve is encrusted with the many translucent shells of spot prawn. And then he spies and smells a fresh platter of Chanterelles swimming in butter and duck fat. His tongue curls around his salted and greased cheeks: he is so laminated in oils and pates and jellies that he could easily eat himself. Blackberries stain his chin. Salmon bones hang like forgotten combs in his curled hair. He cannot possibly eat enough.

This is an image of my city.

By this I mean that it is sensual, and not at all for the mind. No great novel will ever be written in my city.

It is a very white place, in spite of its self-identification with world-island-culture, and by that I mean SANDALS and Bob Marley posters and marijuana cults. Tacky shit.

At its worst, it might even resemble a kind of gated community, or one of those insipid all-inclusive resorts where people’s last pleasure is a kind of endless feast, wherein no one makes any causal connections between the poverty and the plenty, a kind of reverse Alcatraz–what better gate than a stretch of wild ocean water?

But at its best, my city is the spoonful of golden honey drizzling from a spoon before the clear and soft August sun: absolute splendor, and a kind of bedazzlement stretching before one’s vision as one lies self-mummified in the tall-grass, hearing the sea-birds and smelling the salt-bite. In every good thing lies the nucleus of such experience.

You have to take a ferry to get to my city. The ferry used to have some small charm when it was publicly run, as if the  gravitas  of being a public corporation had kept it from bedazzling itself with plasma screens proclaiming how “Awesome” the ferries are (their “buzz word”), as if the very experience of riding the ferry was not enough persuasive information for the traveler.

When you board, you will realize that it is now a private corporation, and you will pay increasingly exorbitant rates for coffee that tastes like acrid piss, and be bombarded with half-wit savvy advertising, plasma screens, and sullen and underpaid employees. Just as you think that not even these privatization-turkeys can sully that pure experience of hanging your head over the ship’s railing, and letting the wind-vipers tussle your hair about, you hear the loud skronk of a public address system tinnily providing play-by-play explanations as to what exactly we deck-dwellers are looking at, as if pure Oceanic and Biological information is what we seek, as if knowing the Latin name of a whale is in some way commiserate with the internal peace gleaned from being outside on the deck of a boat, lost in the quiet solitude of one’s own meanderings. The microphone is terrible power.

I have a traveler’s hint: on the top left side of the television is an on-off switch. Are you tired of hearing about how good the cafeteria is, even though you are sitting ten feet away and you can smell the fetid reek of fried garbage-juice? Flick that TV off. It’s empowering.

When you drive off the ferry, you must still drive for a half-an-hour to get to the city. On the left you will see occasional glimpses of the ocean you have just been on. That is the cold ocean, the one connected to Alaska and ice-chunks and death-currents.

Because we are Falstaff and we must gobble and devour, you drive through farmland, instead of the usual artery of Best Buy and Targets and embalmed teenagers in spiked neck-collars drinking jug-a-juice out of styrofoam cups. You will only see farms.

If you are not intent on seeing some British shit like double-decker busses and a wax statue of that Queen, then I must implore you to turn right onto a small country road instead of injecting yourself into the city.

If it is a summer afternoon, you will be driving into the sun, and the tips of the thousands of leafy trees will be back-lit by that glorious August orb. You will smell wonderful fragrances of apples and pears and rhubarb and other stuff–I am no gardener, and I don’t really know what is blooming in August: lots of fruit. And to your surprise you will come, willy-nilly or whatever, to another shore. You didn’t know you were on a peninsula. As the peninsula runs–for you–from North to South, when you look left you will see a great mound of trees and rock. And when you look across the clear and glassy expanse of water you can see, quite close, that other shore, rising up in unison with this shore’s ascent. That’s because you are standing in a Fjord.

And you will doubtless notice again how calm those waters are! Nary the swirl of a current! And later your curiosity and the splendour of this sea-lake forces you to commit just a drop of research, and you will learn that between the tip of the gardened peninsula, and another island, lies a underwater shelf or lip that has protected the waters of the fjord and its undisturbed ocean floor for, I think, ten-thousand years. And then you see shapes in the water, and see people swimming around, and seals tracking them, and behind them you see again the reflected white sea-clouds, seemingly sent from Venice or Florence, and you wonder in it all.

And I will ask you to say a small prayer, and ask that the incompetent and negligent turds that currently guide our ship-of-state are not actually so utterly in the pocket of oil-and-gas as to lift the moratorium on  drilling on that most deadly coast that is a current or two away from this small pocket.

And after your prayer, you will drive on a small road that rolls underneath stern and moss-encrusted pillars of Fir, and the bedazzling light trickles through the spaces between trunks, and it makes you think of some classical poet exiled from his city and forced to till the soil and keep bees, or more likely it just evokes childhood, and because you are following my map, you want to see that very specific piece of land that I wrote an album called The Golden River for, so you must turn again onto arch-treacherous roads that run along the very ridge of the Fjord’s peak, and now you drive past Mt. Work, where I truly want to write about, as my wife and I hiked up there just two weeks before she gave birth to our son, and she hiked up in rubber boots for some reason, 3 kilometers straight up, and it went from murk and bog to half-light to sylvan paths, where each tree-petal reflected the sun and created a silent, plateau-ed, daytime disco, and then up to the very top, climbing through wind-tears on the dark-side of the last silhouetted peak, and then into the lung-rattling gusts, and finding three sun-blasted stone seats, one surely for our then-unborn son, we jumped about in victory, but I cannot seem to write properly about that, as one needs a touch of distance, so you will drive on and then stop at  Gowland Tod Park.

This park is a little pocket of ferns and gigantic firs and stony slopes that rise out of forest to tower over the water below. It is wonderful to climb to one of these peaks and eat an apple and watch the one or two sailboats skitter about on the surface of the sea-lake below you. The paths and trails of the park are made of firm brown dirt. A layer of fir needles often dusts up beneath your boots. The trail is dug out on the spine of the ridge, so your view is panoramic and dizzying. From some points you can see both the protected water of the fjord, and also the rough waters of the Juan De Fuca Strait, and at the end of your vision, when you look South, you see the Olympic Mountain range in America, a foreign land.

You can walk over streams that tumble and fall down to the sea. There are caves and gullies and ravines and log-bridges and logs that have fallen over ravines that might mean death one day and exhilaration the next.

I feel a great sense of vibration from this land. I think the mix of the sun, and the altitude, and the proximity to the warm sea, brings about a multitude of different climates and regions–one minute you are ensconced in a rain-forest, and the next minute you are walking in grassland, and then the foliage fades away and you are climbing up a rocky knoll.

My wife and I first discovered this park at the beginning of our courting rituals, and by that I mean we drove a car out there, and then innocently and nervously pecked in the parking lot. Then we took a walk. I had never really understood nature, just as I’d never understood happiness, or kindness, or any of the soft virtues. My energy was drawn from strife. So this space became a kind of geographical metaphor for this awakening of the finer chambers of my heart, or something close to this statement. Thus, when I sing a line like “There’s love in the creeks”, I am thinking of these streams.

The one act I recommend is just putting your palm on a few trees. You should feel the moss on a Douglas fir tree, or the cyborg-skin of an Arbutus tree. Man: that’s a soothing act.

But you might not feel what I feel, and you might be weary from all this emotion. You might find this a bit much. You might be hungry. I suggest you get back in your car, or hop back on your bike, for all of this is possible on a bicycle, and go downtown and eat.

Here are some places that I must insist on. The first six choices are 10-dollars-in-your-wallet approved:

And in everything we taste the sea air.

True, when I think of my city, I think of the forests and the food. It’s not a city of ideas, but of mutable and temporary pleasures.

ps: go to the  record store.

One thought on “Off The Record :: Frog Eyes – Victoria, British Columbia”