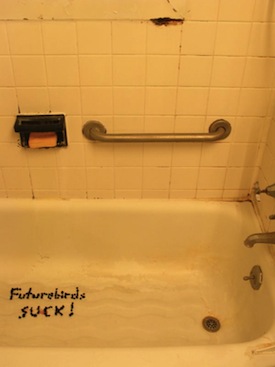 (Autumn Tone is set to release Futurebirds debut full-length, Hampton’s Lullaby, next month. The record is a monster. Below we revisit the EP. Catch it before it’s (hint) taken off bandcamp.)

In reality, you probably could try to fuck with Futurebirds, they just wouldn’t care. Because they’re affable folk, and their southern dream rock–if there were such a thing–is easier going than it is aggressive. Futurebirds’ just slightly degraded lo-fi submersion and pedal steel trance create a fuzzy, dream-like veneer that cushions a rotating trio of vocal leads, and more than a helping of communal harmonies. Still, it’s doubtful you would fuck with this band, not by appearances. Their cast of characters includes at least one John Bell/Jim James bastard child, one half-Cherokee and Choctaw, and an uncanny Will Oldham doppelganger. And indeed, that is also probably an apt reference to their influence: 21st century Indian outlaw southern indie-rock, eccentric folk. That swings.

And Futurebirds do, in fact, bring all of their equipment on the bus, including a light-projector ready-made for pickup house parties of which they’re certainly regular attendees in their hometown of Athens, Ga. And that probably defines their self-titled EP, released earlier this year, better than anything else. They’re kids. Partiers. Making music with what’s available to them, and doing whatever they can to make it. We described them before as DIY, and it is just as blue-collar, unpretentious and unfettered as that. Their lyrics aren’t overly sophisticated, but they needn’t be either, since they strike at exactly where the band is right now–early adulthood, few responsibilities, multiple questions, making music, hoping it all works out. For someone who’s sitting in a purgatorial age–not that anymore, but not the next thing either–that’s refreshingly optimistic, even if they don’t intend it to be.

Futurebirds (or rather, FUTUREBIRDS, because they “like it up there in all caps”), have been barnstorming in front of their first full-length out on Autumn Tone later this summer. It began with a (very) last-minute entry to SXSW, where they played a handful of shows (including one pickup gig at a house party, lights in tow), and it has continued with stretches along the east coast. The EP probably won’t properly prepare you for their live set if you catch one of those shows–which are decidedly more energetic/nuts–but it is a nice palate whetter for the forthcoming long-player, an appropriate introduction to a band you just can’t fuck with.   words/ j crosby