(As subject material goes, violence, in songwriting, is about as seminal as they come. In light of the recent outcome of the Oscar Grant case J. Neas reflects on similar past events and the songs they inspired. Chime in below in the comments.) 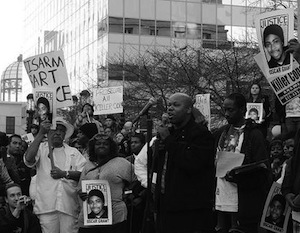 Oscar Grant, a 22 year-old black man, was fatally shot on New Year’s Day, 2009 during an altercation with the Bay Area Rapid Transit (BART) Police Department in Oakland, California. The United States has an unfortunately long history of questionable altercations between police and citizens where people wind up dead or injured. Whether it was the rioting that followed the ‘not guilty’ verdict in the case surrounding Arthur McDuffie’s death in Miami in 1980, the similar riots that occurred in Los Angeles following the verdict in the Rodney King case in 1992, or the protests that have followed the ‘involuntary manslaughter’ ruling on July 8th in the case of Grant’s death, public outcry, in various forms, is never far away.

By virtue of the fact that he was unarmed at the time he was shot, Grant’s death has earned some uneasy comparisons to the deaths of Amadou Diallo and Patrick Dorismond who were shot to death by members of the New York City Police Department in 1999 and 2000 respectively. The officers involved in both cases were acquitted of all charges.

A mere three months after the officers in the Diallo case were exonerated, Bruce Springsteen and the E Street Band rolled into New York for a ten night stand at Madison Square Garden. It was here that they would play, for only the second time ever, a new song called “American Skin (41 Shots).” The song had been debuted at a show in Atlanta, Georgia right before the New York shows and it takes a mesmerizing and heartbreaking look at the Diallo case. The officers involved had fired 41 shots at the unarmed man and it’s this phrase that becomes the repeated mantra for the song. The song is not, despite the protests that were mounted by police organizations, a blatantly anti-police song. It delves into the shades of grey of the case and even sympathetically portrays one of the officer’s reactions immediately following the shooting. Ultimately Springsteen bemoans the fact that whatever American skin you wear, whether it’s the officer’s uniform or the immigrant’s work clothes, it’s possible that you could be killed for it. “We’re baptized in these waters and in each other’s blood…you get killed just for living in your American skin.”

In 2001, following the July 2000 exoneration of the officer involved in the death of Patrick Dorismond, Le Tigre released their take on the deaths of Dorismond and Diallo with the song “Bang! Bang!” on the From the Desk of Mr. Lady EP. It is the riotous punk b-side to Springsteen’s sorrowful attempt at evoking the emotions of healing and insight. Bookended by newscast audio about the killings, the meat of the song comes in the shrill, visceral vocals of Kathleen Hannah. “Who gave them the fucking right to run around like they own the night,” she screams. “There’s no fucking way this isn’t about race.” The anger reaches its catharsis when the band and others proceed to end the song by screaming out numbers one at a time as they count to 41. The fury in their voice is unmistakable, but as the impact of what each number represents comes home to the listener, their cries shift from mere anger to frenzied sadness. What begins as a howling maelstrom of righteousness has become a beaten and weary cry into the dark: How in the world could this have happened? words/ j neas