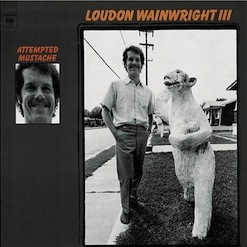 By the time of Attempted Mustache’s 1973 release Loudon Wainwright III had been kicking around for some time, releasing several critically acclaimed folk albums throughout the early 70s. One of Loudon’s finest efforts, the LP is a loose, low key, affair with brutally honest lyrics coupled with a few shambolic, drunken performances that are highly entertaining. So while the playing and atmosphere is relaxed, this LP features some of Loudon’s best loved songs—a few that rank as true classics. Columbia released Attempted Mustache just as Loudon was just coming off the fluke hit “Dead Skunk.”

The album opens with “Swimming Song,” a very personal composition with clever lyrics. For this track Loudon’s ex-wife taught him how to pick the banjo. Towards the end Doug Kershaw adds some wonderful colors with his superb fiddle work. All in all, a brilliant performance that captures the man at the top of his game. Other great numbers are “A.M. World” (drunken country-rock), “Come A Long Way” (fragile Americana), “Nocturnal Stumblebutt” (sexually charged singer-songwriter nonsense) and “Lullaby” (melancholy folk-rock). These tracks rank as some of the finest unsung singer-songwriter material from the era but the humorous, looser cuts such as the live, talking-blues of “I Am The Way”, the modern/indie sounding “Dilated To Meet You” and rocker “Clockwork Chartreuseare” are almost as good.

More of a hard luck hero than a James Taylor, Loudon more than delivers the goods on Attempted Mustache. words / j. nardelli