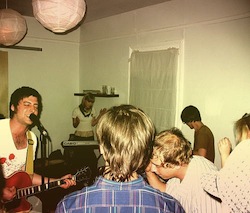 The Love Language is, in a lot of ways, a band that seemed to emerge from nowhere. Having caught them opening for Megafaun and the Rosebuds in Chapel Hill in the spring of 2009, the next thing I knew they had an excellent debut album out and were signing to Merge Records with a sophomore album in the works. Their first album for Merge, Libraries, is a rich and layered expansion of the fantastic song writing that appeared in a much more lo-fi fashion on their first record. AD spoke with the Love Language’s main songwriter and singer, Stu McLamb, about their busy past year, the reorganization of the band’s line-up, recording the new album and French inquiries about NASCAR.

Aquarium Drunkard: It feels like it’s been a really busy year for y’all, going back even to the first album that came out last year and coming up through getting signed to Merge and releasing the new album.

Stu McLamb: Yeah, it’s been pretty non-stop. I think since January, when I re-focused and sort of knew where I was heading now, it’s been even busier but in a more productive way. But the last year – the first album started out with me and then the album came together. It was a seven piece band and that was a lot of schedules to coordinate – and that’s not to discredit any of the hard work. Everyone busted their ass. It was just hard to set up a rehearsal, you know, with seven people. We toured really hard. We did three or four pretty extensive tours on that album with the old band – the first line-up. We really got news we were signing to Merge last summer – I had a second record on my mind the whole time. I was slowly writing songs and demoing them.

When it came time to record, I think we had such a great charisma live, but I had a hard time figuring out how to harness that into a record. I was at a cross-roads over whether I should let go of the reins and just let it be – let the band get in there and play live and record – but I’ve always worked more like a puzzle – all the parts fit in a place in my head. When I do the demos, I’m very particular about how I want everything to sound. I write it all out. They’re more like compositions than me writing a chord progression and lyrics. It’s a very orchestrated kind of thing. I found myself over everybody’s shoulder during the sessions and we weren’t getting exactly what I wanted. I talked to Josh [Pope] who was kind of my wingman in the band in a lot of ways, and he was recording some of the sessions and we ultimately both came to an agreement that it wasn’t really working. At the same time, he had mentioned to me that he wanted to pursue his own musical project [The Light Pines]; the origins of that band go back to the origin of the Love Language and he kind of put that stuff on hold when things with the Love Language took off. I really can’t thank him and the whole band enough for all the sacrifice. But the decision we made was for me to go do this record on my own which freed me up to do the album like I wanted and Josh and Kate [Thompson] and Tom [Simpson] to go do the Light Pines. They’ve been getting a lot of good reception locally and I’m sure they’ll interest some labels. It’s been a happy split, you know.

That was around January when we decided to split ways, and then I moved to Raleigh and started to record the album with a good friend, B.J. Burton. Me and B.J., during this whole period, had been talking about how I wanted to make a record with him in the studio, but I’d been trying to figure things out about how to use the band and I was going through a period of figuring it all out, you know. So, for the record being made in a month and a half, there was a period of three months of me just trying to figure shit out.

AD: That’s one of the things I enjoy about the new album is that it sounds a lot more focused than the previous album. That’s in both the way the instruments sound and the way the songs come together and the songwriting itself. Do you feel that way about it? Is that a result of you getting to craft the record the way you wanted?

SM: Well, they’re two very different records. They’re not that different in song writing, as opposed to the execution. The first record, I wasn’t even thinking of it as a record when I was making it. I mentioned earlier how, when I write, I orchestrate all the parts. So, I don’t come to the band with ‘hey, man, here’s a rough idea of a song.’ I come to the band with a complete ‘demo,’ and I’d put demo in quotes because I record it on shitty gear that I have and that I use for demos, but I’m very much involved in it like a production. I lay down a lot of tracks. When I did the first record, it was that same process, but as the songs started to pile up, I was like ‘well, am I going to do this in the studio,’ and sometimes I’d think about doing that, but eventually I really liked the sound. It was really cohesive and felt really hot. I just felt like, for the first record, that told the story best. So that’s why the first record was so lo-fi and ramshackle.

The second record, I had the same situation. I had all these demo versions that sounded much like the first record, but I wanted to try and push it further in the studio. So we just banged it out in a month and a half. You can think of the first record as this slow process of songs written and recorded over a year, a year and a half, maybe. And the second record was a pile of completed demos that were all recorded in a month and a half. That time restraint helped keep it focused. You’re listening to a very streamlined record. It wasn’t like we took a break and came back to it. It was a month and a half, every day, sixteen hour days, just non stop.

AD: Does that make this album simply a snapshot of the band at this moment and later on this year, it may not even be reflective of the band’s sound live?

SM: Yeah, exactly, and that’s always been the case. I’ve always liked to separate albums and performances. Those are such different factors. The Love Language, live, we get compared to crazy, rowdy garage rock stuff. We definitely have that live, but if you think about the records, there are so many somber, slow songs and a few upbeat ones, but on the album, I don’t think we sound like a rowdy garage band. I think of the albums like an intimate friend – something you listen to on headphones in the dark by yourself. And the live show, you know, you’re drinking beers and having a good time with your friends. They’re very different mediums. With this album being more controlled and [having] parts in place, I think that works very effectively in the setting of an album. But when we do it live, we rock it out a lot. At one point [in the recording process], B.J.’s computer crashed – a pretty badass Mac – we laid down about 80 or 90 tracks on one song. It was ridiculous. So, to make up for that, we have five people on stage who just sweat and rock it out and hit crash cymbals and distortion pedals and all that. We try to consolidate that energy.

AD: Since you have such a distinct vision of what you wanted the album to sound like, did you have any particular influences in mind when you were orchestrating this record?

SM: I’m sure there are from song to song. When I did a really early demo of “Blue Angel,” Roy Orbison was a big influence. That was my tip of the hat to him, copping one of his song titles and using that for the chorus. I never looked at the record as a conceptual thing prior to making it. There are lots of different influences sprinkled throughout the record. “Brittany’s Back”‘s guitar hook – I found some Spanish cassette of Spanish pop songs. I have no idea what they are – some random truck stop tape. “This Blood is Our Own” is very much me trying to do an Etta James-esque song. “Heart to Tell” was me trying to do girl-group pop to impress a girl who was like ‘you can write slow shit; why don’t you write me a nice pop song?’ [laughs] So, I tried. I think actually “Wilmont” was after that Beach House record that came out while we were in the studio. I loved that Teen Dream record and I think we were thinking of that when we did that song.

AD: You got a chance to open a couple of shows for Phoenix here in North Carolina. How did that get set up and how did their crowds react for you?

SM: Oh, it was a great experience. I don’t know all the details. They had an opener drop off early on and hadn’t solidified [a replacement]. Our booking agent has some connections and pitched us as a band, and I don’t know if Phoenix had even heard us before we opened or anything, but we somehow landed it. They were such nice people – really down to earth and funny. We talked to them quite a bit. They were real inquisitive about North Carolina and stuff. Asking in French accents about NASCAR and stuff when we were in Charlotte. “What is this NASCAR?” They were sweet guys.

But yeah, the crowds were great – especially at Koka Booth [Amphitheatre; Cary/Raleigh, NC], that’s a little more of our turf, you know. We had a good response. Charlotte, it wasn’t like they weren’t into it, but the audience just kind of stood around. We don’t let that get to us; whether we’re playing for two people or 4,000, we’re going try to give it everything. So it was funny. I’m up there breaking a sweat and everyone is going crazy and I’d look down front and there’s a couple having a conversation with each other.

AD: That’s what you see, but I’m sure there were people in the audience who hadn’t heard you before who were digging it.

SM: Yeah, you know, as big as Phoenix is in our world, there are so many small worlds within the big world. There are plenty of people who don’t know who Phoenix is; there are a lot more people who don’t know who we are. But in Charlotte, this kid came up and said, ‘hey, what’s the name of the band again?’ And I said ‘Love Language’ and he said ‘oh, cool, where are you guys from?’ I said ‘Raleigh’ and he said ‘oh, me, too!’ So it’s great to have an opportunity to reach people who don’t necessarily seek out local bands. It was a great chance for us to catch some new ears. words/ j neas

4 thoughts on “The Love Language :: The AD Interview”