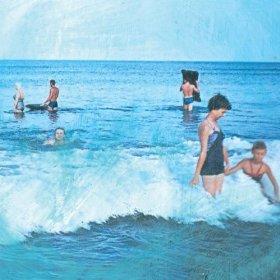 We’ve been sitting on Tall Hours in the Glowstream since its August 25 release, but that’s not because Cotton Jones’ latest hasn’t made an impression. Quite the contrary. We were enthralled enough by last year’s Paranoid Cocoon to include it in our year-end wrap-up. We were possibly more rapt when the CJ’s Rio Ranger EP sprung on us earlier this year. And for some of the same reasons Glowstream has been a favorite of 2010. More than simply the music, it’s a well-defined progression of a band, even within the subtle confines of the Cotton Jones sound. Don’t get me wrong, the band definitely took a left at Page France, and headed into new frontier. But once there, they found themselves settling in, becoming better acquainted with it, and are now telling its story as denizen, not newcomers. Each step has been just a little different, with a just-slightly altered perspective on past lives and current ones. But just as it’s more than the music, of course, it is the music that keeps us drawn in.

Critically, the band’s reception has floated somewhere between tepid and warm waters with past releases. Often noted for their “reverb” and “lofi” sound, the band is then circumscribed to the nebulous worlds those words invoke. But those elements, while clearly present, are secondary, even tertiary to the Cotton Jones’ true defining qualities. Cotton Jones is Contemplative and warm embrace of the past, and ethereal and, occasionally, phantasmagoric constructions of reality.

The latter spells itself out in the album name, conjuring images of idle creatures basking in the sparkling bank of an incandescent brook. Therein lies the poetry, as the “glowstream” is singer Michael Nau’s own term for a perch above a Cumberland, Maryland, highway, streaking with the lights of cars. His lyrics often incorporate these proprietary descriptions of life. We saw in before in Paranoid Cocoon, when a woman’s voice becomes a “mouth full of stars.” As is his habit, Nau’s lyrical themes reprise themselves throughout. In “Somehow To Keep It Going,” he sings, “Come on baby, let the river roll on.” While not explicitly the glowstream, it lends itself to that territory, fluttering with life as is passes. Indeed, urging it to roll on. “Sail of the Silver Morning,” the album opener, similarly beckons. Its title alone has radiant connotations, while the first verse begins, “It comes to me like sunbeams on the water.” Whitney McGraw’s delicate tone does as much to support this imagery as the words, the voice creating a reflective undercurrent like mercury casting an array of colors from beneath the song. And electric auto-harp and the shake of a tambourine only add to Cotton Jones’ dreamlike quiver.

All of this creates an interesting contrast to the former characteristic of the band–their close relationship with decades-old sounds. It’s like a weary traveler in 1980s West Virginia stopped by an early ‘60s roadside diner round about midnight, alone but not lonely. In person, Nau exudes an oldness, both in tone and attire. His voice somehow equally draws from Roy Orbison (“Man Climbs Out of the Winter”) and whispers made husky with time.

Countless bands–nearly everyone–draws in some form from the past, a few approach the era Cotton Jones finds comfort in. (Grizzly Bear’s “Two Weeks” comes closest to mind.) And the last few years, bands have certainly clung to lofi for life. So, it’d be easy for Cotton Jones to find themselves caught in the middle, bound by broad descriptions of contemporary music. But existing in the middle makes them, in a way, unique. And unique, by definition, isn’t thrown around lightly. I’d be hard-pressed to find a band that feels as honest as this one does in delivery–in the imaginative songs they write, in the music from which they draw inspiration. Avoiding any sort of comparative analysis of quality, that’s as far as I’ll go. But I do believe what they’re telling me, even as the words come from another world. And I’ll take that departure, that retreat into the fantastic every time. There’s a short list of bands I would never miss live. Cotton Jones is on it. There’s a shorter list of records I can listen to nearly every day for a month and a half from the time of their release, and still feel refreshed by them. Glowstream is one of them. And as reviews go, that’s simply as objective as I can be with this one. words/ j crosby

8 thoughts on “Cotton Jones :: Tall Hours In The Glowstream”