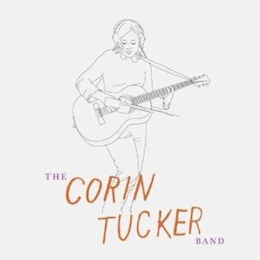 When Sleater-Kinney called it quits (or went on hiatus, depending on your stories) in 2006, it was on the heels of their finest moment – a riotous, gargantuan sounding record called The Woods. The band had been making slight alterations to its unique sound for the previous four albums and what turned out to be their swan song became their biggest stylistic leap forward as a band. So now that the member of the band who has been most silent in the ensuing years is releasing her debut solo record, it’s good to hear the same sonic progress being made.

The Corin Tucker Band’s 1,000 Years is a work that revels in the inimitable sound of Tucker’s voice and guitar playing but expands the traditional musical surroundings behind it. Sleater-Kinney built their sound around two guitars and drums and rarely, if ever, expanded on it. That deliberate limitation was part of what made their music invigorating, but for her solo debut, Tucker is joined by multi-instrumentalist Seth Lorinczi who adds keyboards, acoustic guitars and even string arrangements to the jagged and slippery guitar work of Tucker.

For lovers of The Woods there are a lot of good sonic comparisons here. “Handed Love” channels the thick, propulsive sound of that album; “Doubt” grabs a hold of the infinitely catchy rave-ups that have always made albums involving Tucker fun. But the record manages to echo moments even older and a few new ones as well. “Half a World Away” and “Riley” both sound like the thinner, punchy work of One Beat, but it’s the softly fraught “Dragon” and the wistful “Pulling Pieces” that are more unique in Tucker’s catalogue. The latter especially is a beautiful use of her halting guitar work and a song that firmly cements the back half of the album.

1,000 Years is a revealing and highly enjoyable record. It’s the sound of a consistently great songwriter learning how to work outside the boundaries that defined her work for so long and coming up with something every listener hopes for out of an artist – evolution.   words/ j neas