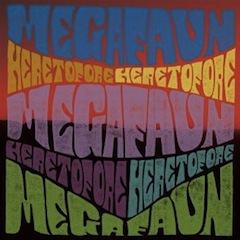 Megafaun’s breadth of style has been a hallmark of all its releases thus far, but the Heretofore EP is possibly the best example yet of the rambling, shifting and well-sequenced tendencies of the band. But it’s a touch ironic to say that considering that this record is, in many ways, also their most accessible and pop-leavened.

The EP is bookended by two of the loveliest songs in their catalogue to date: the anthemic and surging title track and the loping, sweet and sighing “Bonnie’s Song.” Megafaun have long been experts at crafting some of the most maudlin moments from their harmonies alone and these two songs are perfect examples of this. The latter especially, a song written about a family friend of the Cook brothers who gave Brad his first guitar, is as perfect an ending to the record as one could ask for.

But it’s the songs between those two that set them up to be as poignant as they are. The rollicking “Carolina Days” is an ode to their adopted homeland that is as catchy as the album gets and “Volunteers” echoes that song’s geographic sentimentality in its ambling pace and gentle swing. Interspersed between these are a pair of songs that most broadly embrace Megafaun’s jazz leanings and of the two, the 12+ minute “Comprovisation for Connor Pass” is, surprisingly, the better. It’s not usual for a long, instrumental jazz improvisation to be repeatedly listenable and to serve as the record’s musical height, but without this song, the album becomes merely a really solid set of expertly crafted Megafaun tunes. With it, the wandering, enrapturing flow of this song truly makes this EP stellar and sets the beauty of the rest of the record in even starker relief.   words/ j neas