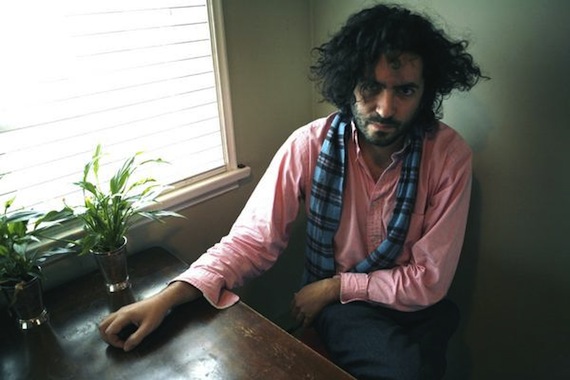 Aquarium Drunkard: The past year has been busy for you in prepping Kaputt for release and also finishing up releasing and promoting the New Pornographers’ Together. Since you’ve released work with four different groups in the past three years, do you have a process for balancing the work on all of them? Are you, for instance, working on Destroyer music while out touring for the New Pornographers? Or do you keep them exclusive?

Dan Bejar: There is no overlap between any of those things. So I need not employ any process to keep them apart. They just are apart. But schedules can get a bit mixed up, and I have had to ok Destroyer masters from the speakers of a New Pornographers bus, if that’s what you mean. That shit can be stressful.

AD: You’ve been with your label, Merge Records, for quite some time, a rarer thing for artists in the modern age of commercial music. How has your relationship with them evolved over the years?

DB: Do people label hop a lot these days? I’ve never really thought about it, though I have noticed that Merge is pretty much the only label I can think of that doesn’t drop bands. It’s actually astounding, that! It’s possible that if you actually continue to make records, they will actually continue to put them out, into infinity, regardless of how little they sell. It’s really really rare, and says a lot about them. I’m not exactly sure how our relationship has evolved, but I am repeatedly shocked at what’s been a lot of carte blanche support over the years.

AD: The last two records, Destroyer’s Rubies and Trouble in Dreams, had you working with a consistent lineup for one of the first times in your career as Destroyer. Is the same group on board this time and how has that stability worked on these records?

DB: Actually the only two records that involve a consistent line-up are Thief and Streethawk. Trouble In Dreams had a different drummer than Rubies, but sometimes a different drummer is like having a different singer. This was one of those cases. I see very few similarities between those two records, aside from maybe “Introducing Angels.” And maybe “Leopard of Honor” sounds a bit like “A Dangerous Woman Up To A Point,” if you were to look at those two songs stripped of their performances…though they mean completely different things (there’s the rub!). Nic Bragg is the only person from those records who plays on Kaputt (unless you’re talking about the vinyl version of Kaputt, in which case Ted Bois pretty much composed, performed and recorded the entirety of Side 3!). He also played lead guitar on This Night.

+ Continue reading after the jump…

AD: Each of your Destroyer albums has had a different sonic feel to them, but Kaputt seems especially unique in the catalogue. Were there specific bands, records or even a time period you were purposefully trying to evoke?

DB: I knew that the record was gonna be really cooked in the studio, that drums were gonna be either programmed or electronic, that synths were going to provide whatever chord structure anyone felt necessary, and that a degree of treated trumpet and late-night sax were to be involved. Dave was listening to Diana Ross. Nic dusted off a Vini Reilly cassette. John bought a fretless bass. I was thinking about directors with a background in advertising, like Michael Mann and Ridley Scott. I was thinking about my youth, Reagan, Rome’s version of jazz music. The degeneration of the signal path in favor of thin outlandish spaces. Mood lighting. The 80s. There, I said it…

AD: Is it easy to see an album of songs coming together? At what point do you look at a collection of written work and think “this is an album?” And with that in mind, how do you differentiate what goes where in terms of the various bands?

DB: I don’t think about the various bands, I only think about Destroyer. It’s been so long since I’ve looked at a collection of written work, I no longer know what that feels like. It’s almost impossible to see an album of songs coming together. But somehow you try to see it. It’s strange, this business of making albums. I love doing it, but there must be something aside from Art at work that I deny even myself the opportunity to think about.

AD: Goals change during the course of an artistic career, so where do you see yourself in five to ten years? How have your motives and ideas about your art changed from the earlier days to now?

DB: I don’t understand the world of goals. Goals is a numbers game. I never had a goal, let alone goals, when I started making records. And now I have even less. I am at peace with way more things, which is standard operating procedure for aging. And way more confused and terrified by the world, and even more at peace with that than with the other stuff. I am grounded by things outside the world of artmaking, not true 10 years ago. I am less polemic, more thoughtless. More like a windchime these days. I’m not sure I’m suited to what it is that I am doing, I guess that hasn’t changed…

AD: You’re taking Destroyer on the road in March and April for a pretty sizable tour with the War on Drugs. What does a successful Destroyer show look and feel like to you?

DB: One where the sounds coming from the stage sound good to me.

AD: Anything you’d like to request audience members throw at or to you on stage this tour?

DB: Can I ask them to not throw anything at us or to us? Or how bout a rose…   word/ j neas

5 thoughts on “Destroyer :: The AD Interview”