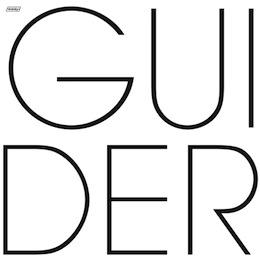 Disappears want to be chased. That’s the immediate feeling I got after watching the Kyle Obriot-directed video for “Superstition” late last year. The track is like the theme song to an ultimate car chase where the group’s one-chord guitar attack and driving floor tom represent the pistons of an engine firing at top speed. Brian Case’s (90 Day Men, The Ponys) echoed vocal command blasts from out the window with its Doppler effect signifying how far behind you really are. Pick any classic muscle car you want, Disappears are always fifty yards ahead of you.

Guider’s sound is gigantic and singular. You won’t find many chord changes or unnecessary left turns as another one of this album’s constants lies in its repetition. On “Not Romantic” Case’s vocals initiate a rise of wah-pedal waves and a dense flurry of guitars. Title track “Guider” darts along the same road only its trajectory is lightning-fast with a bass line that starts out with a steady pulse and eventually jumps around a descending scale. “New Fast” is full of ghosts and shadows that take shape around the most reverberated guitars found on the record — blowing up into a wash of fuzz. Half of the album’s running time is explored through the fifteen-minute stunner “Revisiting”, demonstrating that the band can gently switch gears and still sound hypnotic.

Guider is a fast-paced album whose downstrokes charge through tunnels and long stretches of asphalt. You’ll slow down to pick up friends on the way; The Velvet Underground, Suicide and The Jesus & Mary Chain to name a few, but by the end of this 30-minute barrage of tremolos, dark fuzz and stabbing vocal lines this quartet remain the true felons you can’t seem to catch up to. Guider’s essence is punk throughout but it’s also void of any clichés and probably better than the majority of indie-rock albums you’re going to come across all year. words/ s mcdonald