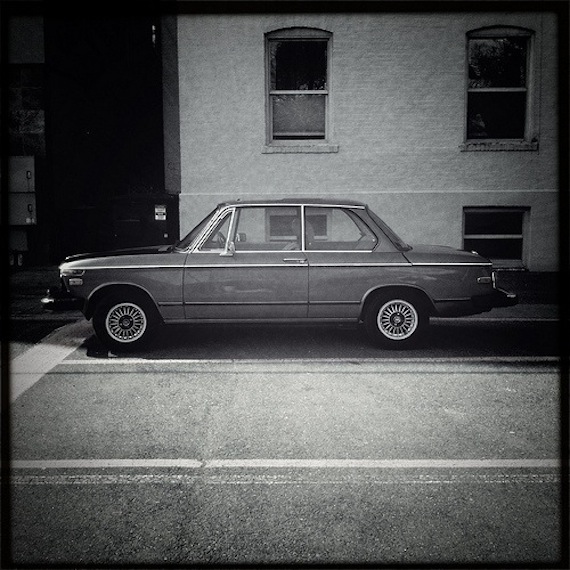 I can’t exactly remember when my love affair for the BMW 2002 came about. I just remember when it came time to start thinking about driving, I was hell bent on getting one as my first car. I would scour eBay after getting home from school, and send links of amazing finds to my Mom and Dad. Hinting, of course, but really screaming out to them that I had to have one! I was obsessed. It wasn’t hard to convince my dad that these were cars worthy of my interest, him being a BMW nut himself and all. So, he would quell my fantasies by telling me all about the 2002, and how they were the cars that saved BMW from going out of business.

The BMW 2002 was brought into the world in 1968, and manufactured until 1976. It came at a time when BMW was really struggling. The 2002 changed everything for BMW, and for the automobile industry in general. It was a boxy little cute car, made for the adventurous but average driver. Small, compact, and super reliable. And also, incredibly adorable. It resembles a bathtub, in my mind. People really gravitated to the design and the simplicity when it first entered the scene. It just so happened to be the pre-curser to the much lauded 3-series, a huge success for BMW now. Because it was small, and so simple, it was agile and super fun to drive. And also relatively cheap to own!

So, back to me and my 2002. It was getting to be time for me to start hunting for my first car. And I remember pleading to my parents to help me find a BMW 2002 (I obviously had no money, but my parents were going to help me with my first car purchase). All my pleading seemed to lead to dead ends, so I started getting my heart set out on a Volkswagen Golf. We went to the VW dealership and looked around at a few, but none made my heart pitter patter like the thought of a 2002.

One morning, I remember my dad telling me a friend of a friend knew this guy with a bunch of 2002’s. He lived on an island called Whidbey Island, outside of Seattle. I convinced my dad to take me there to look at them, just to look. It was such an exciting day, taking the ferry, having a little road trip, not knowing what to expect. Thinking, hoping, wishing I would come home with a 2002 of my own.

When we got there, it was a 2002 haven. They were all just lined up outside this mans cute little Bed and Breakfast cottage thing. We talked, and toured, and I finally spotted him. The cutest thing I had ever seen. I had to have it. It was instant love. A 1976 BMW 2002 (named Sebastian by it’s previous owners). My dad could see that look in my eyes, and he too, knew we needed to buy that car. So, we bought it then and there, sight unseen and drove it back to Seattle. It was, and still remains one of the best days of my entire life. And it’s been with me ever since.

I care about my car like I care about a true friend. I take care of it, and when I neglect it for a little while, it always reminds me that it’s there and needs my attention. I’ve had to spend money here and there to keep it running, and to keep it pretty. Money that I sometimes don’t have, being a musician and all. But, it’s always worth every single penny. I couldn’t live without it, and count my lucky stars each and every day to have it in my life. So, hooray Sebastian! Hooray!