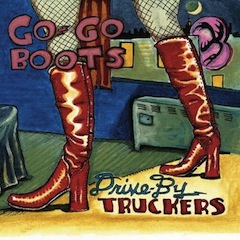 Nine studio albums and a decade and a half into their career, the Drive-By Truckers have created their own mythology; a mythology that is at once self-contained yet continually feeding off the external world. Some might call it folklore. Explicit at times, but more often than not, subtle, the ever-expanding web the Truckers weave via their albums is one of nuance—shades of light and dark that often touch on the ‘duality’ highlighted on their breakout LP, 2001’s Southern Rock Opera. To understand this is to truly appreciate the band. Whereas the aforementioned Rock Opera may serve as the only explicit example of the group going out of their way to craft a concept album, their catalog taken as a whole is part of the same dance; i.e. pieces and patterns of the same quilt. In short, it is life that happens on these albums—in these songs—to these characters. And while you won’t find anything so obvious as, say, something akin to the Snopes family popping up over the years, shared motifs abound throughout peering out of every thematic nook and lyrical cranny.

Go-Go Boots (an album whose material is culled from the same sessions that yielded last years The Big To Do) exists in and plays off this mythology. In terms of a through-line connecting Go-Go Boots with its predecessor, one need look no further than The Big To Do‘s “The Wig He Made Her Wear.” A murder ballad of the highest order, the Patterson Hood penned track, and cornerstone of the album, dealt in the same dark familial stuff found on Go-Go Boots‘ “The Fireplace Poker” and the album’s namesake track, “Go-Go Boots.” A song cycle dealing with the same bloodshed viewed from various angles, the three tracks are pieces of a larger puzzle; Hood is reportedly working on both a novel and cinematic version of the tale’s events (based on an actual murder that happened in Selmer, TN).

In terms of sheer tone, Go-Go Boots often has the tight, yet loose-limbed, feel of the Muscle Shoals-born R&B the band grew up hearing in their native Alabama. Part of this has to do with the ghost of the late/great Muscle Shoals musician Eddie Hinton who the band pays tribute to on two of the LP’s 14 tracks. And part of it is ostensibly due to the band’s recent work with the likes of both Bettye LaVette and Booker T. Jones. Whatever the exact brew is, it works. The album is not a rocker, it is a groover. Cooley’s honey and bourbon drawl is in fine form and very well met with the album’s country-soul vibe. Shonna Tucker absolutely owns her cover of Hinton’s “Where’s Eddie,” transforming the track from the bemused rendering of the original into a genuine, aching, love song.

Working the slow-burn, Go-Go Boots is a grower—and one that promises to scratch the late-night itch. It’s an album you’ll pull from the shelves time and again after the guests have all gone home but before all the ice has melted. It’s one for the magic hour when there are a couple drinks left to be had.