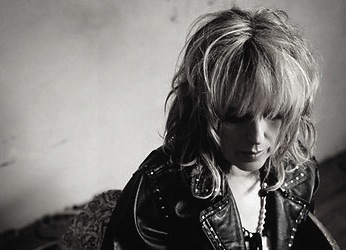 Aquarium Drunkard: The new record, Blessed, will be out here on March 1st, your first record since 2008. That’s a bit longer than between your previous records this decade, but I also heard you went on a bit of a writing spree for this album.

Lucinda Williams: Yeah and it was going to come out earlier, but we ended up remixing it with Bob Clearmountain. Then it was remastered and the artwork took a little bit longer.

AD: Why’d you end up remastering and remixing it?

Lucinda Williams: We got Don Was on board and one of the reasons was that we wanted to know what he thought. We wanted another set of ears and his influence. The opportunity presented itself and one of the things he suggested, after we had it all mixed, he said “you know, is it okay if we send a couple of tracks to my buddy, Bob Clearmountain, to remix,” and we said, yeah, sure, that’s why you’re on board. So we sent them, got them back and knew then that we needed to have him remix the album and it pushed everything up a couple of notches. I’m very pleased with the sound.

AD: It’s a rich sounding record. There were a number of records in the earlier part of the 2000s that were more loose sounding, working with a set studio band. Maybe Don Was has been more sympathetic to the sound you were looking for?

Lucinda Williams: Yeah, that’s why we wanted to get him in there. We didn’t want to make the same record twice. The last album it was Tom [Overby] and Eric [Liljestrand], our engineer, and me. We met Don at this Neil Young tribute thing about a year ago. Don was in the house band and I was performing and we were hanging out back stage and initially hit it off. When we got ready to go do the album, Tom talked to me about “what do you think about bringing Don Was on board?” And Don was real excited about doing it. We were familiar with the stuff he’d done. I loved the Kris Kristofferson albums that he did, the production on those. He has such a varied background musically, the stuff he’s done with the Stones and all that. One of the things Don said as we were going in was “no matter what goes on, musically, as we’re recording, I want everything to revolve around Lucinda’s vocals.” And that was the right thing to say. I knew I was in good hands. That’s one of the most important things for me, to have the lyrics right out there.

AD: This speaks of my tastes, but the first thing I thought of when I saw Don Was worked on the record was, “oh, Lucinda is a fan of Paul Westerberg and Don produced Suicaine Gratifaction.”

Lucinda Williams: Yeah, in fact, that’s one of my favorite albums of all time. See, I jumped – when I saw that – when Tom showed me that Don did that album with Paul and I went wow, okay. It sealed the deal.

AD: You’ve actually got quite a few big guests on this record. Tell me about how Elvis Costello ended up on this record doing a somewhat rare music-only cameo.

Lucinda Williams: I know. To be honest, I had never heard him play guitar like that. Tom said he knew that Elvis was in town. He was finishing up his album with T-Bone Burnett and he had a little bit of extra time. We had the tracks cut and Tom said he wanted to try and get Elvis to come in and play guitar on these particular tracks. And I said, really? Tom said, “oh, he’ll shred on these. Just wait ’til you hear him.” And I said okay. Usually you think of Elvis coming in and singing, you know. So Tom sent Elvis an email, Elvis emailed him back and said “are you sure this email went to the right person?” [laughs] So he came in early one evening, we had some dinner and were recording over at Capitol. He came in and sat in the control room, had three or four different guitars, listened to each track before hand – since he hadn’t heard them yet – and just started shredding. It was just amazing to watch. I was in there watching him. Again, it kicked it up a notch or two. He ended up on three tracks: “Buttercup,” “Seeing Black” and “Convince Me.”

AD: You also have Matthew Sweet on the album.

Lucinda Williams: Yeah, because I loved working with him on Little Honey. He has these great instincts with harmony. He’s on “Buttercup,” “Convince Me,” “Copenhagen.”

Lucinda Williams: Yeah, we were really happy to get Greg because he’s so busy. He added a great texture to the album. The rhythm section are my regular guys; Butch Norton and David Sutton on drums and bass. I’ve had rotating guitar players. Doug [Pettibone] left to go work with Marianne Faithful; he’d been on all my albums before. There was really a band, as far as the live, being there at the same time. Rami Jaffee on all the keyboard stuff. Greg Leisz was on most of the tracks, and some we didn’t have him. But most of the time it was a pretty live feel. The overdubbing was Matthew, he came in and did harmonies one night, we had Elvis come in and do his guitar. But that was pretty much it. We wanted to keep it pretty basic.

AD: Can you tell me a bit about the title of the record and is there any sort of theme there? You’ve spoken in interviews about feeling pretty content lately, which seems to go along with Blessed as a title.

Lucinda Williams: You know, it’s interesting, because I’m getting asked this a lot, in terms of what the theme is, but it’s the hardest question for me to answer, because when I go in to make a record, I don’t really think in terms of a theme. That usually comes later after we put all the songs together, and it just kind of all falls together. I don’t ever think in terms of a theme that much. I guess it’s probably easier for the listener to come up with a theme.

AD: That’s the role of a lot of art though, isn’t it? That the audience is the one who eventually puts their own..

Lucinda Williams: Sort of puts their own “the theme of this album is”..

AD: Yeah, they decide for themselves.

Lucinda Williams: As the artist, I’m always going to think of each song individually. Tom is the one, after all the songs are done, he talks with Don, and Eric, the three of them, which songs would work best together, the sequence. That’ll have a lot to do with it. I kind of get out of the way at that point; not really. I’ll offer an opinion, of course, but that’s where their talent comes in. Tom in particular because he worked in marketing at record companies for so long. What’s going to be the first song, the last one.

Generally the way I end up explaining is just that my songwriting is about where I am at any given point in my life. I guess the theme would be that I’m older and wiser. I’m going to have a different perspective – I just turned 58 last month – so I’m going to hopefully be wiser now in my older years. There’s almost a kind of world-weariness about it, but in a joyful way, too. It’s like the song “Born To Be Loved.” Maybe that’s the theme for the album. That’s a universal song. Someone was talking to me about it as a love song, but I never thought about it that way. It wasn’t written as a love song. It was written for the universal “you.” So I’m certainly going to be looking at things differently than when I was 48, 38, 28.

AD: At this point, this is going to be your fourth decade of releasing music. In a career that long, have your goals and ideas about your art changed a lot over that span of time?

Lucinda Williams: No, I would say no. I actually feel more prolific than I’ve ever been. I’m not sure what to attribute that to. I’ve found the person I want to be with, and I guess that’s a big change. In a way, you want to think the person you’re with is going to inspire you. That’s always been a dream of mine, to be in a relationship where I felt inspired and I was very creative and self-fulfilled that way because I’ve never had that before. You think about these couples like F. Scott and Zelda Fitzgerald and how they inspired each other and I feel like I have that with Tom. So now that I’m done with all that unrequited love stuff, I can branch out even more as a writer and explore other areas.

It’s interesting. I read the on-line review on No Depression and it’s an interesting review and afterward I read the blogs where people commented. One guy was really adamant that this was the first album that satisfied him since Car Wheels on a Gravel Road as a whole album. The review itself, too, mentioned something like that I was getting out of my own way and being less self-indulgent and that I’ve gotten away from that. [laughs] I shouldn’t read the blogs. Everyone has a different perspective on things. But there is a lot of that feeling around this album, like this is a career breaking album in the same way Car Wheels was.

AD: As a fan, in my initial listens, I think I’ve enjoyed it the most of any of your albums since World Without Tears.