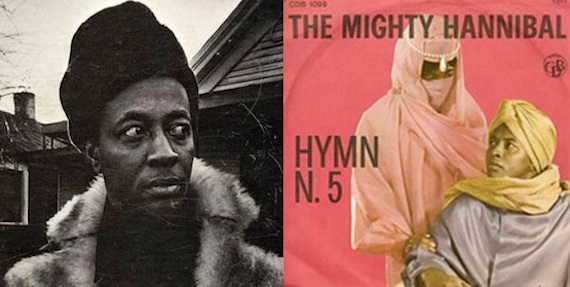 Hymn No. 5: courtesy of The Mighty Hannibal, née James Timothy Shaw is both a highlight and stylistic outlier in the oft-turbanned soul man’s lengthy career. Inspired one night by a newscast of Walter Cronkite discussing the growing amount of United States soldiers that were returning from Vietnam addicted to opium, “Hymn No. 5” excels in being an anti-war song that taps into the innate horror of war rather than delve into obvious punditry. Slowly chugging along like a jazz funeral dirge, accented by longing and pulsating organ, the track is an account of harrowing desperation. It is also incredibly moving and Hannibal’s finest hour.

If you’re new to Hannibal, check out the Norton Records release, Hannibalism; a compilation featuring material written between 1958 and 1973.