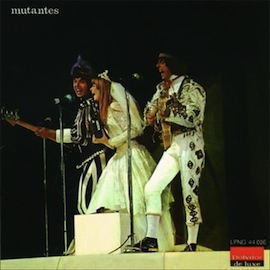 Any Mutantes record is a mind-blower and this one makes an unforgettable introduction. The music and voice of Os Mutantes transcends any language barrier such that even the most literary of music enthusiasts can still fall deep for these dazzling sounds. David Byrne, who reissued an anthology of the Mutants on his Luaka Bop label, seems to back this sentiment up in the fantastic liner notes to Stop Making Sense: “Singing is a trick to get people to listen to music for longer than they would ordinarily.” One phrase echoes in my head when I listen to Os Mutantes: ‘better than the Beatles.’

Though greatly inspired by them, Os Mutantes expanded musical possibilities further than The Beatles and still maintained the disparate elements of pop song and art form. Laced with the sexiest assortment of fuzz tones and electronic effects, the production is startling and the compositions are eclectic, addictive, and lovely.

Os Mutantes’ history is as complex and interesting as their music; they are one of the best known bands of the Tropicî¡lia movement and aimed straight at the frightening political climate of Brazil 1968. With no small thanks to Byrne’s efforts, serious interest in their music led the band to reform and they are presently performing and releasing

No serious rock collection overlooks the Mutants. At the same time though, this is in no way strictly the provenance of obsessive record collectors—the joy in their music should appeal universally and to all tastes. words / b mcgrath