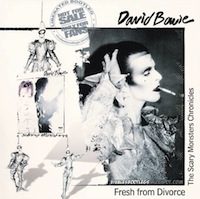 I’ve been a real freak for Bowie’s Scary Monsters over the past year. Compounding this near obsession was discovering the collection Fresh from Divorce: The Scary Monsters Chronicles five or so months back. At 19 tracks the (very) grey-market bootleg is described by its compiler as a selection of “relevant documents surrounding the creation of the album including alternate versions and demos.” It also features several television performances (notably Saturday Night Live), but as a listener you show up, and stick around, for the meat which is the demos and alternate takes. Full download and notes can be found here. A very cool look inside and behind the last truly great Bowie record.

Below, the video for “Fashion,” the second single off Scary Monsters to be released in 1980. Dig as Bowie cops at least three new dance moves and be sure to play ‘spot the band member.’