“Once Bill was making extremely forward statements from behind a veil. Now he’s making veiled statements from a forward position. He’s fundamentally the same person, but stylistically almost everything has changed.” 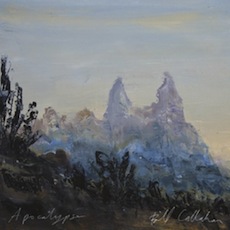 The above quote is pulled from last Friday’s New York Times piece on Bill Callahan. Quoted is Rian Murphy, former bandmate and office manger of Callahan’s longtime label, Drag City Records. The Times piece itself is good read, illuminating, and recommended to those interested in the famously press-shy Callahan. But it’s Murphy’s quote that sums up in three sentences the essence and direction of where Callahan’s music has been moving since the end of his tenure releasing music as SMOG.

The descriptors I once used to describe Callahan’s former moniker (i.e. dark, pensive, forlorn, intense, opaque) still apply to his work under his given name, but it was clear from the first moment I put on the “Diamond Dancer” single, off 2007’s Woke On A Whaleheart, that things had changed. For a Callahan composition, “Dancer” was positively bouncy—as ‘upbeat’ as anything he had done before, or since, for that matter. While his next full-length, Sometimes I Wish We Were An Eagle, was a quieter affair, it did retain the “forward” position Murphy references, as does his new record, Apocalypse. To an extent, anyway.

Callahan has never been, nor I doubt ever will be, a traditional linear storyteller in song the way, say, Townes Van Zandt was. Known for eschewing traditional song structures, instead allowing his haunting baritone to weave in and out where it may, Apocalypse in many way falls very much in line with Callahan’s post-Smog canon. But unlike its two predecessors, the songs on Apocalypse are sparser, colder. While one could imagine an alternate version of the LP comprised of different, fuller, arrangements, as a whole the stripped down approach applied here presents a unified front, stylistically, in a way that ultimately best serves the songs. (Having said that, I cannot help wonder what added gravity some of the songs might take on with some additional fleshing out in a live setting).

Above all else, the addition of Apocalypse in Callahan’s post-SMOG canon is further proof the bard has many a new tale to tell, and in his new found approach, may just be warming up.

Elsewhere: He Can Sing It, if Not Speak It (NY Time interview with Bill Callahan)