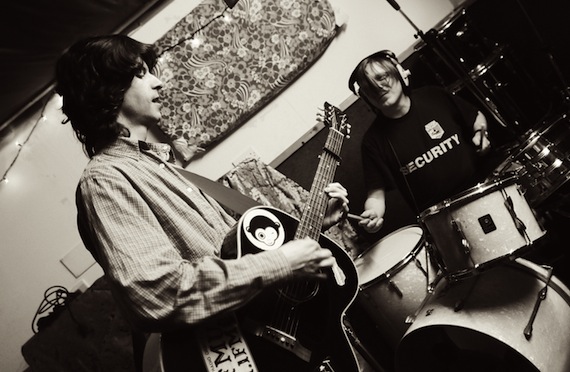 Aquarium Drunkard: I’m a huge fan of Teenage Fanclub. I’ve only gotten a chance to see you guys once here in North Carolina in 2005 on your tour for Man-Made.

Norman Blake: Thank you. Obviously we’re coming back again with Jonny which is on Merge Records again. That’s the record myself and Euros [Childs] made together, pretty much sitting around the kitchen table. It started off as the idea that we could produce a 7″ single and take some copies each and take them to shows and sell them and give them away. And that blossomed into an album. The group Jonny kind of happened by accident.

AD: I heard the record only took ten days to record in the studio. Was that writing time also, or was the record written before you went in to record?

NB: We had some songs written ahead – maybe five or six. The initial idea was Euros was going to come to my class in Glasgow and we were going to record there with a computer and a drum machine and just acoustic guitars and a little keyboard. But I was speaking with Paul Savage who runs Chemikal Underground [record label] studio, Chem 19, and he just happened to say they had some downtime that coincided with the week Euros would be in town. So I spoke with Euros and then we had this idea “well, maybe we can get a drummer and a bass player to come in and record the songs that way.” So sure enough, we called a couple of friends and they came in and basically recorded the backing tracks in two days. It was all completed in about ten and that’s recording and mixing.

It did happen by accident. It started as a much smaller thing; it wasn’t even really a band initially. We only realized it would be a band a few days before we started making the record. It was all pretty much spontaneous. We had written maybe five or six songs already and then we had another half-dozen ideas. We had to finish those pretty quickly. I know when we’re making a Teenage Fanclub record, I’ll agonize over the songs. It may not sound that way. [laughs] But I do agonize over them for a long time when I’m trying to complete them, you know? So with this, we didn’t have to. In a way, there was no expectation for this at all. We were just going to release a single and that was it and then we’d move on.

AD: How did you end up working with Euros in the first place? Had you known each other for awhile or was this a recent thing?

NB: Years and years ago, we were playing in Japan and someone had mentioned to me – I think Gorky’s [Zygotic Mynci; Euros Childs’ previous band] had put out their first album at this point – and someone mentioned to me they thought I’d like them. So I picked it up and really liked it, thought it was great. Shortly afterward, we were setting up a tour in the U.K., so we got in touch with Gorky’s and asked them if they’d come and tour with us. And they did. Me and Euros have been friends since then; we got on well. We have similar tastes in music. We both like garage rock and psychedelia. We got on well and we enjoy each other’s company. That was way back in ’97, I think, and then shortly after that, Euros invited me down to sing and play guitar on the next Gorky’s record, which I did. We’ve gone back quite a long way. This project started when Euros was up doing a solo show and I said “well, come on over to our place,” and he did. We were sitting around the kitchen table and messing around with ideas. That’s really how this project started.

AD: The Jonny album has a cohesive feel to it, but when you listened to it, there are elements of that garage rock and psychedelia, but also moments of pure pop and twinges of country. Were these just all the ideas that came up?

NB: In a way, it’s some of our influences and some of ourselves. Me and Euros both like things like ELO. And I suppose in a way, there’s quite a bit of humor in this record. I kind of like humor in songs. I think you can have fun with songs and still be a serious writer. Think of “I’m Sticking With You” by the Velvet Underground. They were a pretty serious band, but that’s quite a fun little song, you know? I wanted this to have a bit of fun. It wouldn’t really fit with a Teenage Fanclub record or even some of Euros’ recent solo records. It gives us a chance to do that. We did a glam rock song about witches – something that kind of came to us in the spur of the moment – I don’t know why, but it did. It seemed like a good idea, and that’s where “Wich is Wich” came from.

AD: I enjoy that song quite a bit. I’ve laughed pretty much every time I’ve listened to it.

NB: So it’s having the desired effect. The song “Cave Dance,” too, is like ten-minutes long. It just started as a sketch around the kitchen table. Let’s do a song about the history of rock music starting from people hitting a couple of stones together. We kick in a proggy section at the end. It’s fun. We’re just having a bit of fun and hopefully people can enjoy that. In a way, the album is cohesive because of our playing on it, but in terms of the songs, it’s pretty eclectic. We had pop songs and something that’s a bit funny. We were really mixing it up, I think.

AD: I wanted to ask you about “Cave Dance.” Almost every song on the record is three and a half minutes or shorter except for that one. It really seems to stick out. The first part of the song matches up with the rest of the album, but then it goes off in that different direction.

NB: The first part of the song is about a minute and a half long. [laughs] And then eight minutes of the rest of it. Again, the reason we did that is because we could. And when we were putting the record together, we had no expectations. We didn’t know if anyone would release it. We mentioned to some people we were making it, but there were no firm offers. And this was pre-Merge as well. It was pretty cheap to make, so we could’ve gotten to the end of the record and thought that wasn’t any bother. Fortunately, we worked with people who were prepared to release the record and then that snowballed into a tour – we’re going to Japan in a few weeks and then the U.S. That’s all a bonus because it really was a bit of a vanity project for me and Euros.

AD: What was it about the record that appealed to Merge? You obviously already have an in with them through Teenage Fanclub, but what piqued their interest?

NB: I’m not really sure, to be honest. It’s a funny thing. We were touring for the Fanclub record last year and I bumped into Mac [McCaughan; Merge Records] and, unbeknownst to me, Mac had the Jonny record. I hadn’t even thought about it. I didn’t want to be presumptuous. So Mac said “oh, I’m really loving the Jonny record. I think we’re going to make an offer.” I said, alright, okay. This is a surprise. A pleasant one. I hadn’t even really thought about approaching them about it. I’m really glad they did. We have had a great relationship with them on that label. They’re artists themselves, and they’ve had so much experience and they know what’s going on. They’re respectful of musicians and there’s just an integrity and honesty about the label that’s refreshing. Hopefully we can do our job – go play shows and sell some copies of the album for them. The thing about the tour, it’s going to be myself and Euros, some acoustics and a drum machine. Quite a minimalist set up. Most of the venues are pretty small and should hopefully be a fairly intimate show.

AD: With all of this stuff being unexpected, do you have any expectations for the tour really?

NB: I would love for people to show up, obviously you never know. Not that many people will be aware of it in the U.S., so if we can get people out there, that’d be good. Merge really showed a commitment to putting this record out, so I’d really like people to come along. Maybe we’ll get some radio stuff and get people out to shows. If we get more than 60 people a night, I’ll be well happy.

AD: This is the first writing you’ve done outside of Teenage Fanclub in awhile. The output of those records has slowed down a bit..

NB: Yeah, I think I know what you’re getting at. I suppose, as a musician, you like to continually work. People ask me, “well, what’s your occupation?” I’m a musician. And then they ask, “what’re your hobbies?” Music. [laughs] So I’m always writing and I think actually, because it’s so easy to get music out there with things like Bandcamp – I’m planning to do something on Bandcamp. Upload some tracks from a little project I’m working on here. I can record them at home on my computer. Same thing with this record as happened with Jonny – I’ll do it on my computer and then into a studio and then have a band with me.

Gerry [Love; Teenage Fanclub] is working on a solo record at the moment also. We tend to submit five or six songs each for the Fanclub records and we’ll have four each on the album. We always have a few things left over. I don’t write just five songs a year. I’ll write a dozen or so. Some of them stay in the archives, deep in the vaults. But it helps you to continually come up with new ideas, especially working with someone else. They’ll have a different methodology. Euros is good at writing a lyric and melody at the same time where I usually work on the music and then struggle with the lyrics. I’ve learned it’s good to marry the music and lyrics early on because the lyric can help the music develop. I’ve got to learn how to do that more. You know, we wrote the Jonny record quickly, the lyrics quickly. It was great. It was great to not be deliberating for months about a line. We just sang the line and worried about it later – or rather, didn’t worry about it later. You always learn things working with other writers. words/ j neas