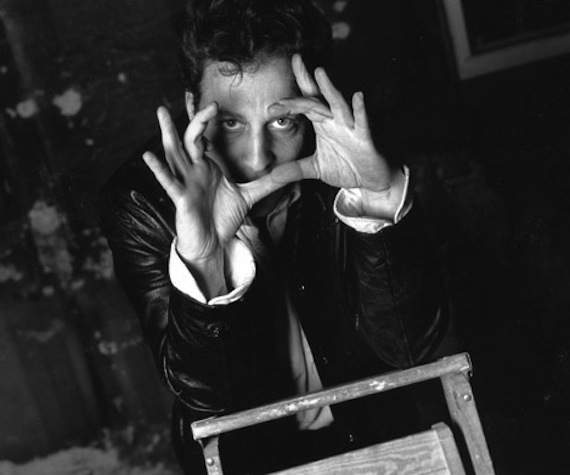 Compared to his contemporaries, Morphine’s Mark Sandman came off like more of an out-of-place beat poet than the zeitgeist’s ‘slacker’ guitar sound of the day. With a presence tapped in to the lineage of Tom Waits and Bukowski, Morphine worked the noir and worked it hard. They dubbed their sound “low rock.” No one else sounded anything like them at the time…no one else sounds anything like them today.

Aquarium Drunkard: Why Morphine, why now?

Jeff Broadway: When I was maybe 10 or 11, I was introduced to Mark’s music by my mom and her sisters because Mark was a second cousin of theirs. I thought it was awesome that I had some rockstar of an extended cousin and started listening to a lot of Morphine as a teenager. As I got older and more into Mark’s music and the idea of family, I began considering how a film, most likely a doc, could be developed from his life story. When we started really getting serious about the project in 2008, it was like, okay, so OG Morphine fans are in their 30s and 40s and have seen a decade of music go by without hearing a sound quite like Morphine’s. They miss it. We wanted to remind them of that nostalgia and introduce the music to a new generation of listeners.

AD: Now a decade-plus since Sandman’s death, the music feels as timeless and out of step as ever. Your film feels like what could be the beginning of getting the Morphine conversation started again.

Jeff Broadway: I agree. I think enough time has gone by since he passed that people will see the film and immediately reconnect with the music — above all. They’ll go download it. Talk with friends about it. Introduce friends to it. And Morphine will become appropriately relevant again. But beyond the film re-catalyzing the Morphine conversation, I think people will walk away from the film with a deeper appreciation of the evolution and breadth of an artist who left too soon.

AD: What’s the temperature like out there? Are young people beginning to discover the band’s music?

Jeff Broadway: I think so, but I also think it’s a bit early to say definitively. The film’s been seen by maybe a couple thousand people and needs more time in circulation before we can determine what sort of bump in sales the Morphine catalog might receive as a result of our film. I am confident, though, that the doc will only increase the appreciation of Mark’s and Morphine’s global cult stardom.

AD: Tell me a bit about accruing the doc’s footage. Had Mark died in 2009, instead of 1999, I imagine there would have been near-infinite droves of media to delve through due to the advent of camera phones, etc.

Rob Bralver: There was definitely a limited amount of material to work with, and we just had to make do with what we could. The movie is a pretty big grab bag of footage – basically anything we could get our hands on. As you say, Mark was popular before the days of entire audiences filming shows in HD on their phones, so what we had to work with was mostly dusty, distorted VHS tapes we found in the basement of Mark’s old studio, Hi-N-Dry, combined with 8mm family footage, plus our own present day interviews. Most of the archival stuff in the movie was shot on analog cameras ten to thirty years ago and then digitized, so while it was limiting in terms of what we were able to use to tell our story, it also gives the movie some of that period feel.

AD: Did the fact you were dealing with a limited amount of footage, by necessity, frame how you told the story?

David Ferino: There were certainly bits of Mark’s history that were, due to lack of footage, not included in the final cut.There’s a pretty scary story of Mark getting stabbed in the chest by a passenger when he was a taxi driver. We initially thought this would give our already dramatic tale even more weight but when we realized we just didn’t have the material, we thought it best not to force anything. There were a few moments like that.

Rob Bralver: Yes, telling a story in a documentary is always kind of done with your hands tied behind your back because you don’t really have much power over the script or what is available to go on screen. We were firm on never doing recreations, so if there wasn’t archival material to help us illustrate certain chapters in Mark’s life, then unfortunately those things had to go by the wayside – interviewees just sitting in a chair, talking about those things did not seem dramatically compelling. In the end, though, we think we were able to communicate the most important parts and as Mark was generally regarded as a man of mystery, we think it’s suitable to not reveal absolutely everything about him.

AD: I’m curious how the process of licensing Morphine’s music for the film has been. Have you run into many roadblocks?

Jeff Broadway: That process is one which some might call “ongoing.”

AD: Were there any songs/videos/etc you were unable to use?

Rob Bralver: We have a large-ish sequence in the movie devoted to when Mark’s music was making a bit of a splash in Hollywood. He was popping up on dozens of soundtracks – recently his pre-Morphine band Treat Her Right was in The Hangover – and on TV – specifically HBO’s Sopranos and Sex and the City. We wanted to show a bit of that actual footage but sadly some licensing people felt otherwise. But you can go watch it all on YouTube and just imagine it being in the movie.

AD: You’ve been hitting a lot of film festivals, yes?

Jeff Broadway: Yeah — it’s been a blast. Since Cure For Pain’s first public screening in February, it’s been invited to participate in more than a dozen festivals across nine countries. Thus far we’ve played at Full Frame, Canadian Music Weekin Toronto, IFF Boston, UNICEF Blue Week in Estonia, and Budapest International. In the months to come, we’re scheduled to play CineDays in Macedonia, Sound Unseen, Out Loud! in Brussels, and the Beat Film Festival in Moscow. Boston was by far and away the most emotional screening because it was truly the film’s homecoming. Members of Morphine and the Sandman family along with countless old friends and contemporaries were in attendance. It was a real point of culmination to have all the people who helped make it happen in a room experiencing it collectively. I can’t say that will happen in a theater near you; but at the very least, it’ll be coming to a television near you in the not-so-distant future.

AD: How’s the reception been?

David Ferino: I’ve been most touched by the family’s pride in it. There’s a lot of darkness in their story and we reveal a lot. They could’ve easily felt overexposed but we presented their story fairly objectively – as objectively as you can in docs – and they’ve really enjoyed it! They’ve been able to watch it as you’d watch any movie, and getting their approval has meant a ton.

Rob Bralver: Yeah by and large pretty positive responses – as Dave says, most importantly the Sandman family and his bandmates have been hugely supportive and that was the ultimate reward for us. We certainly get the occasional criticisms, some of which are valid, but so does every movie and that’s something we’re learning to take in stride – we made this when we were 23 and felt confident at the time that it was perfect and everyone on earth would like it – but a year on we’re maturing slightly and just happy that anyone likes it.

AD: What’s next for the film?

Jeff Broadway: We’re shopping it around and trying to distribute it on as many different platforms in as many different places possible. For the film to eventually be commercially distributed, however, publishing and master/synch rights must first be cleared. In an effort to raise finishing funds to make that a reality, we launched a Kickstarter campaign that runs through June 8. Our end goal is $15,000, and if we don’t reach it, we get none of the money pledged — zero. So if you’ve got a few pennies to rub together and want to be able to give CFP as a holiday gift this year, consider a donation! In all seriousness, we’re just so eager to get this thing out there. We’re proud of it.

13 thoughts on “Cure For Pain: The Mark Sandman Story (The AD Interview)”