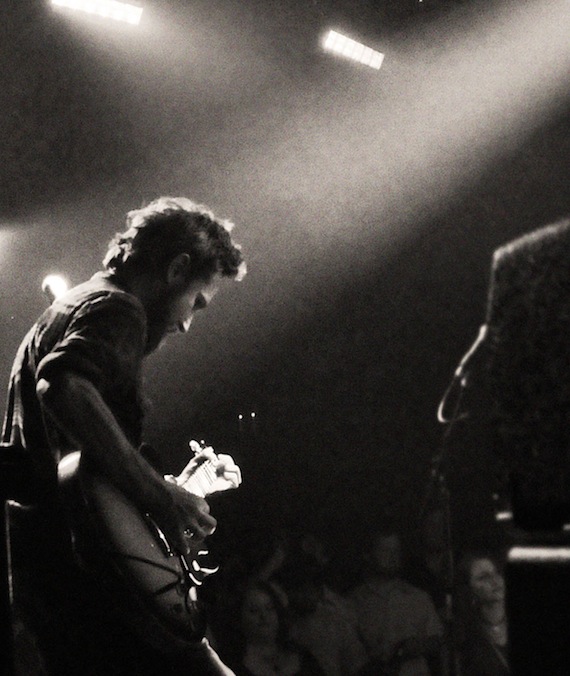 In 2008 Centro-matic, along with their alter-ego South San Gabriel, released the sprawling double LP, Dual Hawks. In the Fall of last year the band released the Eyas EP along with a note stating it would “serve as an apt farewell to that phase of our bands, leading us down a new path.” The culmination of that path is the new Centro-matic record, Candidate Waltz—the most kinetic batch of music the band has released in years. With the album dropping June 21st, I caught up with songwriter/vocalist Will Johnson last week to discuss the band’s new direction, the future of South San Gabriel, his thoughts on touring the house show circuit and Woody Guthrie.   (photo/Stevan Alcala)

Aquarium Drunkard: Last year upon the release of the the Centro-matic/SSG split EP, Eyas, the band alluded a change was on the horizon. I’m curious what prompted this.

Will Johnson: Those songs from Eyas ushered out the whole Dual Hawks phase of our bands in a way we liked.   When we released that EP, we were already pretty far along with Candidate Waltz.   We were already living in a pretty different phase of our voyage.

AD: Right, Candidate Waltz feels like the first major stylistic move in some time…the energy even feels different. What took the band in this direction?

Will Johnson: I wrote most of the songs on bass guitar.   That changed some things from the outset with respect to choice of vocal melody, cadence, and the relationships amongst the rhythm instruments.   It peeled things back and made me think about the writing in a different, less comfortable, or maybe just less habitual way.   We also knew from the beginning that we wanted a specific economy in the tracking.   We didn’t want the songs drenched with overdubs, and we wanted to try some different things with our drum sounds.   We focused more on elements of tension instead of release.   We’re aware that we’re not reinventing the wheel here, but it created some new parameters and terrain for us.   We need new parameters and terrain, since we’ve been together now for seventy-one years.

AD: As the last full-length was spread out over two sides, was there a conscious goal to be more concise with this one?

Will Johnson: Sure, I guess it’s a bit of a reaction to the sprawl of Dual Hawks.   We demanded a lot of the listener’s time with that record.   Not so much the case with this one.

AD: Any plans in the works for another South San Gabriel release, or is the focus strictly on Centro-matic right now?

Will Johnson: We’ll probably make another South San Gabriel record at some point, but no plans are set at the moment.   I’d like to focus on Centro-matic for the time being.   We haven’t seen each other much in the last couple of years.   I feel like we’re all looking forward to figuring out how to play the record, and working on the rock show some.

AD: Speaking of other projects, you just released an acoustic solo EP, Little Raider. Was this in part born out of the intimate house-shows you’ve been involved in the past couple of years?

Will Johnson: In some ways.   I wrote those songs right after I got home from the first round of living room shows last year, so I was feeling pretty attuned to the simplicity of the acoustic guitar and a vocal.   I was living out in Bastrop, Texas at the time, and most of those songs were inspired by that town.   I was just guessing, creating fictional figures based on some of the people I would see around.   It was recorded and mixed pretty quickly, over two days at my friend Jim Eno’s house.

AD: What was the initial impetus behind the house-show tours? Are they a better experience financially/logistically, for you, for the audience…all of the above?

Will Johnson: I gave it a shot based on Bazan’s, and my manager, Bob’s encouragement.   Those shows put everyone on neutral turf in a private location, which changes folks’ behavior some.   There’s an inherent amount of respect involved when people are hanging around a stranger’s house.   It’s a concentrated way to experience music, both from the listening and performing sides, and I like that the nights are done early and the overhead is low.   One thing that took a little getting used to is that you’re usually talking with folks from the moment you arrive.   But that’s the point; to get out and interact with some of the people that have taken the time to check out your music.   They’ve got to make an effort to find out about one of those shows.   There aren’t passersby or casual curiosity seekers in the crowd.   A big positive about that type of environment is that it encourages conversation amongst strangers, and sometimes friendships are forged.   I don’t think that happens quite as often in a venue setting, or at least not in the same way.   I don’t know that I’d want to tour that way all the time, but I do think it’s healthy to change the feel of what touring’s about every once in a while.   I haven’t found myself playing at any rural swingers’ huts or at a sniffing party or anything, so, y’know.. so far so good.

AD: Lastly, an movement per the Woody Guthrie project with Jay Farrar?

Will Johnson: It’s mixed.   Mastering and artwork are coming together.   If I tell you any more than that, I’ll jinx it.

11 thoughts on “Centro-matic :: The AD Interview”