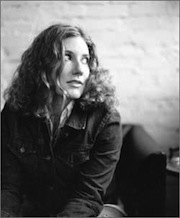 By the time Kathleen Edwards’ forthcoming album, Voyageur, sees the light of day early next January, it will have been almost four years since her last album, Asking For Flowers. A complete travesty for those of us who have had her records in constant rotation since her debut LP in 2003. But thankfully the first single from the record, “Change the Sheets,” has been released and it’s a doozy. The new album was co-produced by Edwards and Bon Iver’s Justin Vernon and while Vernon’s touches certainly show up in the details of this song, this is a certifiably classic Edwards tune.

“Change the Sheets” travels in the spaces of classic rock and country tropes – dissolving relationships, late night travel – and makes them sound completely riveting, no doubt aided by a production that is big without being glossy. It hints at the possibility of Voyageur being Edwards’ best record yet. Here’s hoping. words/ j neas