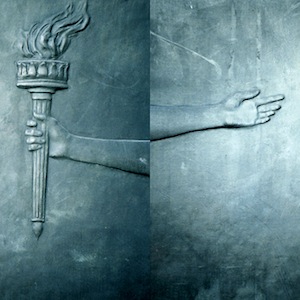 Though they didn’t go on hiatus until the following year, next month marks ten years since the release of the last Fugazi album, The Argument, more or less giving us a decade without one of post-punk’s most iconic bands. The Argument, if it indeed turns out to be, is a swan-song of the highest order – a proper end punctuation to a career spent redefining rock and roll ethics and the post-hardcore musical landscape. In short, despite the lauding of 13 Songs, Repeater, In On The Kill Taker and others, The Argument is arguably Fugazi’s finest hour.

“Cashout,” the album’s first proper song, nearly ruins the rest of the album. Whether it’s the grinding cello that mimics Ian MacKaye’s vocal line during the song’s closing section or just the classic Fugazi lyrical memes of greed, corruption and manipulation (the song is a certifiable anti-gentrification anthem), “Cashout” is everything Fugazi could be in a song and more. It leaves the listener a little unsure of which way is up by the time it’s done, and if it wasn’t for the piercing guitar duel of MacKaye and Guy Picciotto that kicks off “Full Disclosure” immediately afterward, the album might be the perfect example of burning out before it really gets going.

The Argument‘s middle section boasts one of the most subdued stretches to ever to grace a Fugazi album. “Life and Limb,” “The Kill” and “Strangelight” are disarmingly soft – at least by Fugazi standards – but eerily haunting (especially “Strangelight“) and beguiling. It’s these exact type of songs that would cause some long-time listeners to turn away. What happened to the band that recorded “Waiting Room” and “Merchandise?” If The Argument turned you away, so be it, but for all MacKaye and company’s legendary soapboxing over the years regarding ticket prices, all-ages shows and general econo-jamming, they were also constantly evolving as a musical entity. While a track like “Ex-Spectator” could sound like a Repeater-era song for its first minute and a half, it soon sails into something different – winding, rhythmic melodic leads; Who-esque windmill guitar; and are those xylophone tones floating in the background?

The Argument is an album that grows. It’s the type of record that earns a long-standing band a damning-with-faint-praise adjective like “mature.” But it’s also the lack of hyper-tension and somewhat murky tone that gives the album its continued legs. It is a grey album, steeped in the tones of the coming decade, even if there’s no way the band knew exactly what was coming. Released within weeks after 9/11, one would be forgiven for mistaking the album for some sort of adroit commentary on the time. The album’s closing title track opens with the lines “When they start falling / executions will commence. / Sides will not matter now.” As much as Fugazi’s writing always took shots at the powerful, I remember listening to this album when it came out in that weird stretch of time and thinking that indeed “the sun’s a strange light / nothing grows right anymore.” The album ends on a single cymbal crash and then silence. And we don’t hear any more from the band. Possibly for good. words/ j neas

5 thoughts on “Fugazi :: The Argument (A Decade Later)”