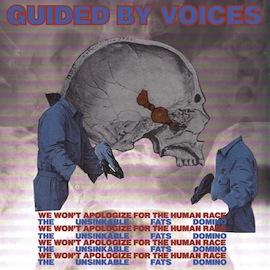 I’m not sure who you trust, but I hope it’s not a musician. Chalk Robert Pollard’s Guided By Voices up as the latest group to renege on their promise not to reunite, not to tour, and not to record as their original (or, in the case of GBV, “classic”) lineup.

But if this is what being lied to sounds like, then by all means, keep deceiving us. “The Unsinkable Fats Domino” is the first single to be released from Let’s Go Eat The Factory, the first record in fifteen to be recorded by the same GBV configuration responsible for classics Bee Thousand, Alien Lanes, and Under the Bushes, Under the Stars.

“Fats Domino” is, at some level, about the eponymous rock ‘n’ roller’s odd rescue from Katrina’s floodwaters. (Domino was pulled from the roof of his Ninth Ward home after the city’s levees broke, and eventually ended up in the on-campus apartment of then-LSU quarterback JaMarcus Russell.) Pollard tosses in references to the Saints (whether of the New Orleans football variety or otherwise) and the ‘59 sound over a choppy riff, while the band–Tobin Sprout, Mitch Mitchell, and Kevin Fennell–thrum along. The band do what GBV has always done best, constructing whip-tight melodies in a semi-haze of production, then calling it quits before the thing falls apart. And while the track misses some of the tape-hiss that seeps over Bee Thousand, it benefits from its relatively straightforward presentation. “The water is undrinkable / except to the unsinkable / Fats Domino,” goes the oddly-triumphant chorus, and the song ends, another small and perfect and disposable gem. words/ m garner

2 thoughts on “Sevens :: Guided By Voices – The Unsinkable Fats Domino”