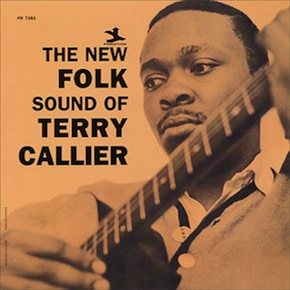 This record is like a river, ebbing and flowing. That may sound vague, but it’s probably the best way I can think to describe the music contained on the 1964 recordings that make up Terry Callier’s debut record The New Folk Sound of Terry Callier. Every time I put this music on I drift away, caught up in the slow, rolling rhythms and sad, rambling lyrics. Though Callier is best known for his run of unique psychedelic records in the early seventies, it’s his earliest material that has taken the strongest hold on my soul: a molasses-thick concoction of traditional American folksong and jazz, with Callier’s warm, deep croon practically floating across the stripped-back musical arrangements. Aside from Terry’s own finger-picked acoustic guitar, the record’s only other contributors are Terbour Attenborough and John Tweedle dueting on the bass.

One of the most extraordinary aspects of The New Folk Sound is in its ability to cast popular traditional songs in an entirely new light. I can guarantee you that you have never heard a more heartbreaking, soul-wrenching rendition of “Cotton-Eyed Joe” in your life. Time-worn lines such as “dying is easy/it’s living that’s pain” suddenly come weeping wildly back into focus, illuminating the bleak underbelly to American folk art that is so often taken for granted in these days of glossy history textbooks and institutionalized blind-patriotism.

What makes this all so intensely compelling, however, is Callier’s hypnotically beautiful voice. There are so many layers of honesty and emotion here that’s its impossible to describe. When the man sings the otherwise inconspicuous lines “oh dear, what can the matter be/Johnny’s so long at the fair,” you somehow know Johnny is never ever coming back. It’s remarkable that Callier manages to harness the raw, spiritual impact of the Southern blues singers without surrendering any of the crystal-clear purity inherent to his Chicago folk background. Even the cackling black humor of “Johnny Be Gay” is offset by the barely-veiled sadness in Callier’s voice and the song’s startlingly violent conclusion.

Recent reissues of The New Folk Sound include a wealth of bonus tracks which add to the album in almost every way, all having been cut around the same time as the album proper and all encompassing the same moods and rhythmic pulses as the previously released material. The music here may be too wide and mellow for the majority of today’s listeners, but to those with an ear for this kind of stuff this is a record you simply cannot afford to miss. If an additional hook is needed, it may be that two songs here, “Spin, Spin, Spin” and “It’s About Time,” are probably already familiar to AD readers through renditions cut by the popular Chicago rock band H.P. Lovecraft. words/ n rayne