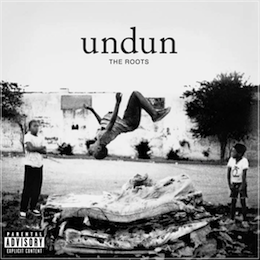 The Roots’ Undun is a concept record – a man’s life told in reverse, starting with the flatlining of his heartbeat and working backward through his life. But it’s interesting that within that concept, the last song with lyrics, and therefore the earliest song in our protagonist’s life, feels so final. “Tip the Scale” feels weary from every angle, a knowing look at what the pursuit of survival will land our narrator. It’s the stellar singing of long-time Roots’ collaborator Dice Raw that lends the song its ache in the form of a chorus where it’s noted that some think “life is a living hell,” others “live life just living well.” Dice Raw, in something approximating a lyrical shrug, notes that he lives life “trying to tip the scales my way.”

It’s this last phrase that gets me – mostly because those closing two words, “my way,” get repeated an additional three times afterward in each chorus. And it’s hard not to think of Frank Sinatra whenever those words are said. Paul Anka wrote the lyrics of “My Way” for Sinatra for his (first of many) retirements from performing and it’s long been associated with Sinatra’s persona of a hard lived life, emoted so perfectly in the voice he came into in his middle age. However, In “The Sinatra Doctrine” from the June/July 2006 issue of The Believer, author Rich Cohen notes that the song “sounds less like a fight song than like the complaint of a wounded animal, the old man making his case on the edge of the abyss…meant to be a credo, it nonetheless says less about how you should live than about how you should die.”

Sinatra’s insistence that “the record shows I took the blows and did it my way” does sound at times like a bitter defense, not a late-life remembrance of a life lived fully. That’s what makes “Tip the Scale” so interesting. Placed at the beginning of our narrator’s life, he has already begun to explain and defend the choices he knows he will continue to make, no matter what their outcome. But as the Roots’ main MC Black Thought lays out in his verse, how do you plan otherwise? “Now I realize it’s the winner that takes all…I won’t accept failure unless it’s mechanical…I guess I’ll be referred to the owners manual full of loners / full of all the homeless, throwaways and the stoners / soldiers of the streets with eighth grade diplomas / and the world awaiting their shoulders as a bonus.” The very world that surrounds him is set up for his failure – or at least, set up for him to inhabit one of only a set number of archetypes.

Where Sinatra defends the choices that white and monetary privilege allowed him to make, Black Thought and Dice Raw rap about the choices that disenfranchisement and being born on the derided ends of both a class and racial system forced them to make. Conscious or not, the echoes of Sinatra hit numerous notes. They mirror Sinatra not only as reflections of what everyday choices mean depending on the social context, but Sinatra’s infamous connections to the mafia, and even his ‘Chairman of the Board’ persona, are flipped by the Roots’ narrator and his early footing on the lowest rungs of society’s ladder.

The hardscrabble rags-to-riches story is as traditional an American motif as any, but the way in which these stories are viewed depends a lot on the person involved. Where Sinatra’s runnings with organized crime are part of the massive legend of the singer, the Roots seem to posit a character who eventually builds a successful life on the back of illegal activity and play him against the white version of the same. Sinatra’s behavior gets a pass because of his skin tone and his acceptance in the dominant culture. As much as people like Jay-Z and the Notorious B.I.G. had infamous backgrounds in drug dealing before their meteoric rise to success, it does beg the question – is that accepted of them only because of the dominant culture’s stereotyping of their racial status (“What do you expect from them”) or, in the case of the latter, their untimely death (“Of course that’s the outcome of drugs”)? Is it really accepted at all, as opposed to Sinatra? “Tip the Scale” does just what its title states in taking a phrase from a song that has undoubtedly been comfort to many a wealthy, privileged elite and making it the mantra of a character determined and simultaneously resigned to his fate. words/ j neas

MP3: The Roots – Tip the Scale