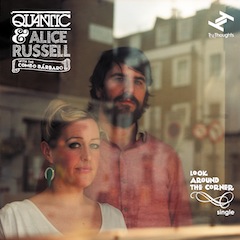 I remember the first time I heard Alice Russell’s voice. Blown away doesn’t even begin to describe the feeling. I can only describe it as devastating, in the best possible way, and awesome (and I say that as a supporter of the campaign to the stop the misuse of the word). My introduction to Alice Russell was through the cover of the White Stripes “Seven Nation Army” that she recorded with Nostalgia 77. After it was through, I immediately had to hear it again. My initial experience with Quantic’s music (his Soul Orchestra’s version of Sunshine Anderson’s “Heard It All Before”) was exactly the same. As a matter of fact, Quantic and Alice Russell’s “Pushin’ On” is still a part of my DJ sets six years after its release. After all this time, they are still blowing me away.

I’d seen the soundcloud links for “Look Around The Corner” floating around Facebook and didn’t really pay much attention. Truth be told, I really hadn’t followed up much on either of them past the first couple of songs I’d heard (big mistake, I know). A couple of days ago, Music Man Miles (Breakestra, Funky Sole) was excitedly telling me about this new song. His description of it as Rotary Connection-esque was enough for me to pay attention the next I saw the link come around. For me this song hits all the right spots. The Rotary Connection description is on the money but I also hear late 60s pop-psych ala Wendy & Bonnie, as well as folk/funk (Ruth Copeland’s “Silent Boatman” comes to mind) and there’s the definite Latin influence via the Combo Barbaro. Its always exciting to hear a perfect song and this is it. This is up there with any of the 60s/70s classics that provided the inspiration. 2012 has just started and I know at its end this will be on my list of favorites. words/ c. weaver

10 thoughts on “Quantic & Alice Russell with The Combo Barbaro :: Look Around The Corner”