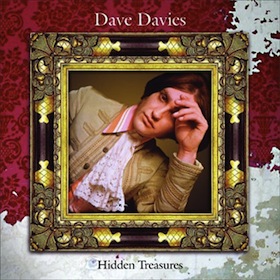 The recent release of The SMiLE Sessions must mark the ebb tide of the steady stream of retrospective issues of mythical “lost” albums from the sixties. One other such offering that crept out with much less fanfare in the same month as SMiLE is the “lost” solo album by Dave Davies, purveyor of revolutionary guitar licks and falsetto vocal harmonies to the Kinks. Despite its enticing title, as with SMiLE the majority of Hidden Treasures songs have been in the public domain in one form or another for some time, but again like SMiLE the new release represents the first legitimate attempt to bring it together as nearly as possible in its originally-intended form.

Hidden Treasures contains what are believed to be the genuine original stereo mixes of the twelve proposed album songs (three of which had remained unissued in any form until this release) with some alternative versions in mono, plus the other Dave songs that did see the light of day as solo singles, as components of Something Else By The Kinks or as B-sides of later Kinks 45s: twenty-seven cuts in all. Despite their piecemeal production over two years, the proposed album tracks exhibit commendable homogeneity and the quality is consistently high with respect both to composition and to performance, offering a set of well-crafted pop-rock songs, many with country-rock overtones. Setting them apart from the Kinks’ oeuvre are Dave’s distinctive proto-punk vocals and his frequent use of modest time signature changes and modulations, while the lyrics are in the form of acerbic interpersonal dialogues and wry observations on love – eschewing his brother’s wistful nostalgia. The best of the bunch are the inexplicably-unsuccessful second single “Susannah’s Still Alive” with its great piano riff and homespun harmonica, the Byrdsy jangle of “Mindless Child Of Motherhood,” the twelve-string-driven, string-laden “Lincoln County” and the lyrically-contentious “Creeping Jean” which recalls Beggars Banquet-era Stones. Despite these comparisons the twelve tracks are distinctly Dave and would indeed have made a fine late sixties album. The extras naturally include the peerless non-album single “Death Of A Clown,”

The contents are solid despite the convoluted circumstances of its genesis, which was lengthy and full of hiccups and about-turns as admirably explained in the fine booklet essay by Russell Smith that accompanies the disc. In 1966 the Kinks’ management proposed a parallel solo career for Brother Dave, on the basis that his good looks and immaculate dress sense might attract a separate teenybopper audience and perhaps lead to films. The man himself was initially resistant to individual promotion, but the other band members were fully amenable and every Dave-credited track was actually a proper Kinks recording, with Dave taking the writer credits and handling the lead vocals but all three other members contributing fully and Ray generally arranging and producing. The initial “Clown” single was a massive 1967 hit and the solo album was immediately proposed, but for some reason from that point on the band’s management and their record labels seemed to lose interest, possibly because of the campaign to rescind the Kinks’ touring ban in the States, possibly because of the success of their increasingly Anglocentric albums there in contrast to their steady decline at home where they were by then widely regarded as a somewhat dated singles band. Specific sessions to cut Dave’s songs were nonetheless held sporadically over the next two years and the twelve-track tape was finally delivered to the Kinks’ US label Warner-Reprise in the fall of 1969, only to be shelved immediately without either a title or a final running order. Forty-two years on we finally have it and it’s been worth the wait. words/ l liechti