(Volume nine of Clifton’s Corner. Every other week on the blog Clifton Weaver, aka DJ Soft Touch, shares some of his favorite spins, old and new, in the worlds of soul, r&b, funk, psych and beyond. — AD) 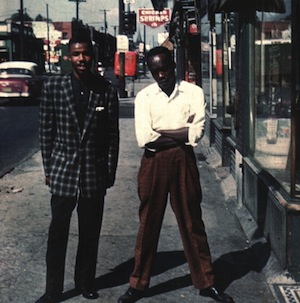 What’s commonly considered to be “blues” tends to be pretty cliche’d. Unfortunately, the forces of commerce and mass media have really obscured the richness and variety of the genre. In the last Clifton’s Corner (Blues Heaven, Pt. 1), I touched on some of my favorite songs. With this installment, I hope to show how varied the genre really is and still play some of my favorites; from country blues (itself a varied genre) to west side Chicago electric blues and all points in between (minus the Blueshammer variety).

MP3: Otis Rush :: All Your Love (I Miss Loving) – An oft overlooked and criminally underrated musician, Otis Rush, along with Buddy Guy and Magic Sam, was one of the founders of the west side Chicago style of blues guitar. Combining the single note style of players like B.B. King and T-Bone Walker with jazzy arrangements, the raw emotion of the earlier delta influenced players (e.g. Muddy Waters), and youthful energy, these players took over from the older cats and set the tone for blues over the next couple of decades. This song comes from Otis Rush’s highly influential recordings for Cobra Recordings. Backed by Ike Turner and his band, Rush merged a calypso rhythm to his urban blues and influenced Eric Clapton (w/ Mayall and The Bluesbreakers, Clapton covered this), Peter Green (Fleetwood Mac’s ‘Black Magic Woman’ took its cue from this song and in turn influenced Santana and their Latin/blues hybrid), the Beatles (notice the similarity to ‘I Want You [She’s So Heavy]’?) and many more.

MP3:  Little Junior Parker :: Mystery Train – Enough can’t be said about Memphis and its importance to blues (and American music, in general). Easily as important as the Mississippi delta, Memphis is responsible for Sun Records, Hi Records, and Stax Records. Country, blues, rockabilly, rock n’ roll, & soul music can all claim the city as a spiritual home. Here we have the original ‘Mystery Train’. Probably better known by Elvis’ version, the original by Junior Parker is a great example of the beginnings of the “Memphis sound” (i.e. simultaneously ‘uptown’ and ‘downtown’) with its urbane shuffle beat, near dissonant piano chording, and countryfied guitar licks.
MP3:  Sleepy John Estes ::   Milk Cow Blues – Going back in time a bit but still in Tennessee, we have Sleepy John Estes’ “Milk Cow Blues”. Bearing little resemblance to other blues songs with the same title, Estes’ song is a great example of the diversity of what was/is considered blues. With his characteristic lazy vocal delivery and heavy guitar strumming, Sleepy John Estes’ style was unique even country blues players. His musical partner, Yank Rachell, contributed even more regional flavor (i.e. bluegrass) with his mandolin runs.
MP3:  Mississippi John Hurt :: Ain’t No Tellin’ – More of a songster in the Leadbelly tradition than a bluesman, Mississippi John Hurt nonetheless contributed greatly to the form. Pioneering a fast, alternating bass style of fingerpicking set against dance rhythms, Hurt was a big influence on the Grateful Dead, Bob Dylan, Nick Drake, and many others. As with other country blues artists, Hurt’s style was indicative of his region in Mississippi. “Ain’t No Tellin'” showcases his unique fingerpicking while at the same time maintaining the traditional 12 bar blues form.
MP3: Miles Davis All Stars :: Walkin’ – From the pre-WWII country blues, we fast forward to the mid-50s and one of Miles Davis’ signature tunes. Like I said in Vol. 9, the blues are the roots of pretty much all American popular musics. No where is this more obvious than with jazz. Along with rock n’ roll, jazz is one of the major offshoots of blues. Written by a Richard Carpenter, Miles Davis took this 12 bar tune and made it into a jazz standard. For years, it was featured in his sets. As a huge jazz fan, I’m always impressed by how the musicians can take something as simple as 12 bar blues and turn it inside out until the form is unrecognizable.
MP3:  Little Sonny :: Memphis B-K – We head back down to Memphis for this funk classic from Detroit harp player, Little Sonny. Much in the same way that jazz took the blues form and molded it into something new, soul and funk musicians often did the same. This is definitely THE funkiest example I’ve ever heard.
MP3: Napoleon Strickland :: Oh Baby – In my opinion, the most unique of the blues traditions is fife and drum music. Fife and drum music dates back to the founding of the United States and was adopted by slaves, who adapted the instruments to African music. Though the tradition is dying out, at one time fife and drum music figured prominently in southern and Appalachian traditions. As far as blues music is concerned, Otha Turner is the most famous to play in the tradition. Napoleon Strickland was one of his disciples. This is probably the closest thing to tribal music that was created by the United States culture.
MP3:  Etta James :: Mellow Fellow – I couldn’t rightfully do a piece on the blues without paying tribute to giants in the field. Recently, Johnny Otis and his discovery, Etta James passed away. Their influence on blues, r&b, soul, funk, rock, etc. is immeasurable. “Mellow Fellow” by Etta James has always been a favorite of mine; probably due to the lyrics, which perfectly encapsulated my vision of the 1960s ‘mod’ern dream. Of course coming from the Chess label, the song and structure are deeply indebted to the blues. Etta James also brings her gospel training to the tune (the big, drawn out intro and her phrasing) and creates r&b/soul perfection. R.I.P.
MP3:  The Johnny Otis Show :: Country Girl – Johnny Otis life IS the history of African American music. With a career that stretched back into the 1940s, Johnny Otis was a major player in the development of   big band swing music, r&b in the 50s, soul in the 60s, and funk in the 70s. He discovered major artists such as the aforementioned Etta James, promoted the music on his own TV and radio shows, and sired one of the greatest musicians ever, his son Shuggie Otis. I could devote a whole post to Johnny Otis (and Etta James as well) and maybe I will soon. For now, I’ll let the music do the talking. ‘Country Girl’ is one of those songs that show the crossover from blues/r&b to soul (and later funk). With Delmar Evans on vocals and Shuggie on guitar, Johnny Otis took the riff from Lowell Fulsom’s ‘Tramp’ and created a monster of a blues-funk tune. R.I.P.
I also want to say R.I.P. to the legendary Jimmy Castor, who passed away in the same week as Johnny Otis and Etta James. I’ll definitely be paying tribute to him soon too.
Previously: Clifton’s Corner :: Volume Eight — Blues Heaven (Pt. 1)
Posted on January 31, 2012January 31, 2012Clifton's Corner