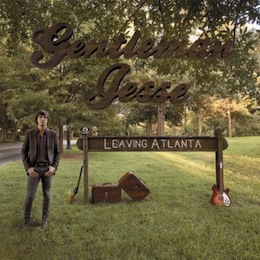 Not a lot has changed stylistically since Gentleman Jesse and His Men released their 2008 self-titled debut – and that’s a good thing. In the four years between the debut and the new LP, Leaving Atlanta, two good, but far from great 7”s were released on Hozac and Douchemaster Records; neither of which hinted at how strong of an album Leaving Atlanta was primed to be. Not one for drastic, but pointed, change Gentleman Jesse has stuck to his guns while tweaking his sound, adding unobtrusive harmonica, piano, and whirling organ lines to a number of the tracks, careful not to overwhelm them. Anyone hoping for Jesse to venture into more punk territory on Atlanta may be disappointed, as this is not an album indebted to punk rock but a fully realized collection of energetic power pop.

Dropping “His Men” from the band name and changing the lineup (only drummer/producer David Rahn remains), Gentleman Jesse’s sound is in step with the mindset of late-70s groups like the Nerves, who themselves took cues from the British Invasion bands of the 60s and were more concerned with writing great, catchy–often perfect–pop songs than trying to figure out how to fit themselves into the nascent punk movement. The one minute, thirty second, ripper “Rooting for the Underdog” looks back even further to the 1950s – sounding like something out of the Little Richard canon – while the breezy, mid-tempo ballad “Careful What You Wish For” could be a lost Stiv Bators single for Bomp! Records. And while the influences for Atlanta’s thirteen tracks are clear, the songs are clearly Jesse’s.

Atlanta is the sound of a songwriter and tight-as-all-hell band in love with the first thirty years of rock & roll – not trying to reinvent it, but rather interested in playing sincere, hook-laden pop songs that stand on their own against many of the more-pop-than-punk bands of the late-70s. The spine of the LP version of the record reads “Leaving Atlanta (Feel Good Songs for Bad Times)”, and while the music is upbeat, the theme of this record is really about personal tragedy and the necessity of sticking out the bad times in order to make it through to the other side. It’s somewhat of a feat to have channeled those experiences into such bright, solid songs. As a listener we’re all the better for it. words/ n green