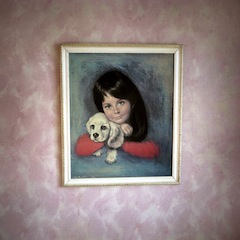 When recommending an album, or even just trying to describe one, people often tend to offer up a single, maybe direct others to a title track if there is one — whatever seems to best represent the record, where “represents” is defined as “sounds like.” But sometimes an album’s most representative track is its most distinct, where the song that stands apart is the song that best identifies the whole. Such is “The Ones You Love,” from Jeremy Benson’s recently (officially) released Darksongs 2. (It’d been sitting in unreleased purgatory for quite some time, I hear. Thankfully, it’s broken free.)

The record’s name befits its contents. These are not light songs. They are sincere to the point of blunt, isolated, or at least coming from a place of isolation. They’re not that sort of desperate country-folk, but Benson’s brand does lay the heavy pretty plain here.

Benson, best known for his work as multi-instrumentalist (guitar, trashcan tops, etc.) for the excellent Roadside Graves, departs from the Graves dusty wander and warbling boom, and emerges from primarily backing vocal duties there to bring his candid tenor to the fore on this, his second solo record. His voice is deep, direct, assertive, even as the reality he sings rubs coarsely with honest reckoning. And this is where “The Ones You Love” stands out.

It arrives eight songs into the record, and Benson’s voice hangs weary over an acoustic guitar. The message is just as direct, but the more emphatic texture of his voice heard earlier in the record is gone. Even the instrumentation has subdued.

He’s tired. He’s at the end. But he has to muster one last charge, one last counsel, harsh as it may be to hear.

“If you see me walkin’ off, in a trail of blood,” he says. “Take care of yourself … like you would the ones you love.” But we find out that “the ones you love” may not be around much longer. Not just the messenger of these words, but your friends, “all your pretty friends” will abandon you. See, you’ll have to take care of yourself, ‘cause no one will be around to do it for you. And that’s a pretty intense conflict to encounter — because if those you love have abandoned you, through death or other departure, how do you love them now? And, so, how do you take care of yourself like the ones you love? It becomes more painful, I’d imagine. Harder. Isolated emotionally, not just socially, physically. Isolated even from yourself.

If it’s not enough, a final, bleak reminder is set forth — that even the heavens or some other spiritual ether won’t provide you comfort. “No, I don’t believe there’ll be anyone, watching over you, from up above,” he says before the last refrain. While that instills the sense of detachment for the recipient one last time, it offers a tell, an indirect admission on the messenger’s part. He’s either going to hell, or to nowhere at all if his beliefs don’t offer a locus of finality. Neither feels reassuring.

“Take care of yourself,” the refrain follows, “Like you would, the ones you love.” As he trails off, echoing “the ones you love” again and again once more, all of a sudden we realize maybe this stark advice, this harsh reminder isn’t for someone else — it’s for himself. The messenger and the subject are one in the same. words/ j crosby

MP3: Jeremy Benson :: The Ones You Love

One thought on “Sevens :: Jeremy Benson, The Ones You Love”