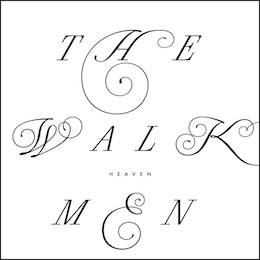 It’s getting to where the appearance of a new Walkmen record is a quiet, intimate event. Heaven, like Lisbon and You & Me before it, has shown up like a best man on an airplane, radiating fraternal excitement and deep commitment and positive nostalgia. Since graduating themselves from the early-aughts New York scene, The Walkmen have seemed to exist outside of the common world, unaware of or apathetic towards the kind of artistic competition that has become attendant with what we think of as forward-thinking music. The group don’t really explore new sounds–why bother when you have such excellent source material–so much as they refine and perfect the romantic indie rock that has always been at their core. Like the two records that precede it, Heaven is a great record in the most traditional sense, which is to say that it’s a collection of exceptionally well-constructed songs that can only be the product of its creators.

Of course, the idea of The Walkmen as NYC hermits is at least a little ridiculous, as the presence of Robin Pecknold on opening track “We Can’t Be Beat” suggests. In theory, the Fleet Foxes frontman should seem out of place working with a band as deeply urban as The Walkmen, and the group’s decision to have him provide simple, brassy harmony over Hamilton Leithauser’s lead makes his appearance seem beside the point and almost laughable–who’s going to try and outsing Robin Pecknold, after all? The song is built around Paul Maroon’s soft acoustic picking and a rather subdued vocal, but it turns on a show-stopping run from Leithauser, who bends the word “so” into four or five different notes, his voice shifting in and out of vibrato with ease as he picks the syllable up, and the band falling in behind him as he gently brings it back down. Like Pecknold, Leithauser is a rare singer for indie rock, one whose voice serves as his band’s finely tuned centerpiece. Though he’s always been a fine singer, he demonstrates on Heaven a confidence and control that eclipses not only his own past work, but that of just about all of his contemporaries. It’s hard to avoid saying that this is his moment.

It’s difficult to determine whether Leithauser’s vocal confidence has infected his band’s songwriting, or if the strength of Heaven’s songs pushed the singer to new heights. Heaven’s thirteen tracks are the elegant, well-wrought kind of pop music whose simplicity disguises their sophistication. There are no swaggering bashers here, no “Angela Surf City,” no “The Rat.” Put differently, there is very little anxiety. These are songs of commitment that come from a settled place, and while the fact that all five Walkmen are now fathers probably shouldn’t count for much in the way their music is heard, it’s hard to avoid the sense of contentment that accompanies these songs. Part of the record’s pull is surely Leithauser’s charisma, that loosened-tie sincerity that makes growing up seem like one of the best possible things that could happen to a person, but The Walkmen are also one of rock’s most elegant machines; Heaven’s slow, stately roll is just as hard to turn away from as their most raucous workouts.

Which isn’t to say that the group have become complacent, or that the steely energy they so expertly bottled on 2004’s Bows + Arrows has been entirely jettisoned, but the questions that the group face on Heaven concern existence without becoming existential; the band don’t greet uncertainty with a howl of despair, but with a nod of patience. In “The Witch,” the album’s best track, Leithauser sings of “driving through Central Michigan / Listening to the country station / And wondering where I stand.” Walter Martin’s organ paints the song the color of celestial milk, and the band keep pressing their nervy rhythm forward without so much as a tempo change while Leithauser resolves: “Love will decide / Love will decide.” The ambiguity and confusion are very real, but they’re met and buoyed by a deep and abiding trust; the song’s static structure suggests that the entire lyric is being sung from the conclusion’s point of view. Leithauser isn’t singing to save his own life here, but he is singing about his life, or at least the life of his character, and somehow that minor change makes all the difference. words/ m garner