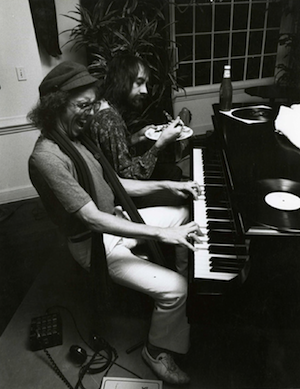 “I don’t know if you’ve been to Paris, but this song was written in Paris in the midst of 1970, which was a bad year for just about everything,” Bob Welch said into the microphone, breaking up a dreamy instrumental passage of Fleetwood Mac’s “Future Games.” The band was playing a set for radio broadcast at the Record Plant in Sausalito, and Welch was looking through the glass of the booth at his former bandmate Bob “Boob” Weston, who’d been relieved of guitar duties after an affair with Mick Fleetwood’s wife. Welch and Weston had stayed on good terms, though, and Welch was happy to find a friendly face in the room. Christine McVie was rolling her eyes; she hated it when Welch did these spoken-word interludes, so Welch locked his stare with Weston and continued. “The only thing that was good that year was the Beaujolais…and the kief was pretty out of sight…but everything else was on the downgrade. We were sitting up in an apartment in Paris–I don’t think I knew you then, Boob–we were sitting up in the middle of a blizzard, getting really wasted but getting bummed out at the same time…because everything in the headlines in the paper, and the club owner, everything like that, it was wrong. Everything was wrong; we were trying to put a simple name to what we were doing, the process of analyzing the people that you’re close with what your thing is…trying to figure out what’s going on, and what will be going on and if you wanna leave or not by the front door or the back door. What?”

There’s a lot to say about Bob Welch’s life and music–his opiated-roué persona of the late 1970s, his time as host of the proto-MTV “Hollywood Heartbeat,” his addictions, his lifelong obsessions with the paranormal, his humor. But for now, here’s a sampling of Bob Welch’s stunning contributions (as guitarist, singer, and songwriter) to Fleetwood Mac–the eerie, Marquee Moon-anticipating “Future Games” and the earlier, lonelier version of “Sentimental Lady” among them. Play them loud. words/ s howe