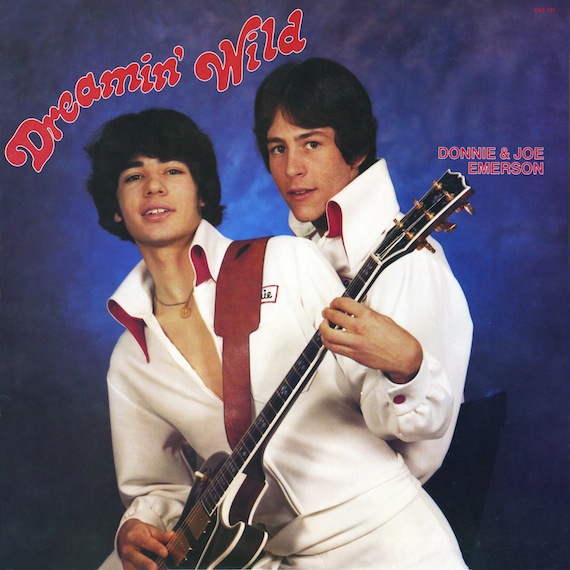 If you’re the type that haunts used record stores, it’s very likely you’ve come across the album art for Donnie & Joe Emerson’s teenage dream and sole release, 1979’s Dreamin’ Wild.   A curio hanging on a store’s wall, perhaps you, like me, incorrectly assumed it was, oh I dunno, a long lost Argentinean psych album…or maybe you thought it was the true-life reference point and inspiration for the 2005 film Brothers Of The Head, chronicling the life of conjoined Siamese twin rock stars. Or not. In actuality Dreamin’ Wild was recorded in the Emerson brothers family built home studio in rural Washington State, a tale covered in Rock-n-Roll Farmers: Donnie & Joe Emerson, the accompanying documentary to this month’s Light In The Attic Records reissue.

Not unlike the label’s previous digs (see: The Strange Tale of Jim Sullivan’s U.F.O. and the Rodriguez records), Dreamin’ Wild boasts a mercurial back-story to match its recorded contents. Leading an isolated, near hermetic existence out in the sticks — free from pop culture, except what drifted in via FM radio and bits of television — the Emerson brothers crafted a sonic medley of whatever sounded good, trends and movements be damned. Yacht rock? Sure. Bubblegum pop? Check. Marvin Gaye? Why not. Their homebrew, a lo-fi mix of naiveté, blue-eyed soul, psychedelic folk, and bedroom funk eventually coalesced on the privately pressed Dreamin’ Wild…only to drift into obscurity for the next three decades. But as Oliver at Soul Sides notes, “This is one of those LPs that helps one understand why people bother to even look for records to begin with”. Amen.