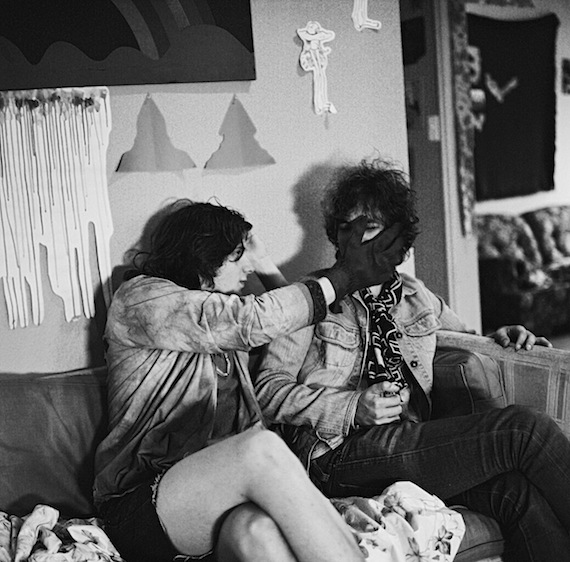 When we first wrote about Foxygen, the band was on the verge of inking a label deal with Jagjaguwar (who recently re-released the Take The Kids Off Broadway EP). Now labeled up, the band is, for the first time, seriously touring behind their work — all while maintaining their frenetic pace of writing and recording. Walking around before their first headlining show in San Francisco, Sam France and Jonathan Rado acted goofy, nervous, deferential and awestruck.

Aquarium Drunkard: In a recent interview, you mentioned the band is not as bi-coastal as “the press” makes you out to be. What other mischaracterizations would you like to dispel right now?

Jonathan Rado: I would say… David Bowie was not a big influence to the record. I wouldn’t say that we’re contemporaries of David Bowie. I think a lot of the things that we were compared to are things we were not listening to at the time.

AD: Every piece on the record searches for influences, even our own — people want to pin it down, or grab on to random moments and say “THIS is David Bowie. That’s the Stones.”

Sam France: I appreciate it, I think it’s cool that in this day and age we’re being compared to old stuff — you don’t see that. We’re all about the old music, it’s not a misconception. We just don’t think about it as being Kinks-like or Bowie-like. But… Glam-Rock, in general, was a big inspiration. So people just hear that and think Bowie.

AD: It seems that, while not bi-coastal, the band has had a few places as “home,” including New York, Los Angeles, Olympia… does the band have a home? Is there somewhere that this project has its roots?

SF: We grew up in Westlake Village, outside of Los Angeles, that’s our base. That’s where our parents live, where we grew up — that’s the main spot.

AD: You’ve been teamed up with Richard Swift in some capacity for a bit now — how did your relationship start?

JR: We decided… we saw that he was going to be in town, in New York, and we decided that we were going to finish the record and give it to him cause he HAD to hear it.

SF: It was a deadline for us.

JR: Yeah. It was an on-going record — we set that as the deadline — we’d set it as March ninth, I think it was, and gave it to Richard Swift on that date. And we literally finished it that morning. Sam put the final vocals on something that morning. We printed out a nice little cover, we taped it together, went down to the Mercury Lounge and we gave it to Richard Swift and he emailed us the next day saying “This is great, I’ve sent it to the label.” And that was it — we gave it to one person.

AD: You’ve mentioned that, on a previous tour, your backing band was Holy Komodo, an Olympia band, who are awesome, and mentioned a character in the song “Babycmon” that you mention on this record as well, “Jesus Jones.” Just who is he?

SF: That’s the mystery. I’m not sure specifically, I think he embodies… I don’t know. Living in Olympia, there was this kid named Jake Jones. He was a drummer in this band in Olympia, kind of a scene-rockstar kinda guy. I just started thinking of these hipster scene kings or queens, and called him Jesus Jones. It’s an abstract idea, I’m not really sure what it is.

AD: Off that — what is the song writing process for you? Is it ever one consistent means of writing or sharing your ideas?

JR: With Broadway, the songs were developed over such a long period of time — so many different parts that after about a year they just melded, we just worked them out a little bit. We used to record by just sitting in a room, play four chords, and be like, “alright, that’s good, that’s a song” and hit record and that would be good, that would be a song. Recently, we’ve taken to demoing stuff, “songwriting” like writing a song before you record it. I think with Broadway, Sam had a bunch of ideas and we just kinda smashed them all together.

AD:   You’ve been pretty prolific. A lot of your stuff can be found online, a lot cannot, and it’s been over a year since you first released the Broadway ep. Now that you’re touring on it, and the press  behind it — is it a weird feeling for you to always be putting out new stuff, and now you’re regurgitating stuff you’ve done before?

SF: It’s a little weird because, for example, we’re only playing one song from Broadway, which is probably a bummer for some people. We’re already playing material from the upcoming record, and the upcoming… upcoming album. It’s not like we’re touring on the material like bands normally do.

JR: It’s like, we know we have to play “Make It Known,” and then we just don’t feel like doing that other stuff — it’s too hard to teach to other people, you know, I don’t want to be like, play four bars of one beat, then make a swing beat, then go into… it doesn’t make sense to anybody but us.

AD: So who’s backing you, the touring Foxygen band?

JR: The bassplayer from Holy Komoto, Justin, who is also in a great band called CRUMBS is with us. Drumming is… well, tonight we have this seventeen year old prodigy named Max Pujols. Normally we have our friend Sean Flemming playing drums. My girlfriend Jaclyn Cohen is playing tambourine and singing.

AD: Sam, what’s it like having your bandmates girlfriend in the band?

SF: I love it. She’s great. In general, I love having a female in the band, it brings that bit of estrogen — it’s really necessary at times.

There’s some confusion, someone’s trying to track down the other band members. There’s a slight panic but they remember they’re not on til later.

JR: Normally we’re like… not headlining. So everyone needs to be here so we can go on at 6:30, but tonight we don’t have to care.

AD: Cause you’ve made it…

AD: But speaking of which — what would be “making it” for you. You’re headlining in San Francisco tonight — musically you’re obviously going to keep pushing forward and recording at your own clip, but what do you want to do with it?

JR: I think we want more money (laughs), I think money would define it. We want more theatrical stuff, maybe on the next tour, like, play characters and get into being Foxygen. We don’t have very much money to do this tour, so we’re barely showing up in places with all our old breaking equipment — everything sounds bad from the stage… if stuff could sound good to us through the monitors, that would be the ultimate “we’ve made it.” Though, I’d like a guitar tech.

AD: Other than just handing off to Richard Swift — it didn’t end with just passing off the record — you’ve got booking agent, a label… has it changed the process or touring?

SF: I’d say that Foxygen is just on the brain right now, we’re in Foxygen mode. I have all the songs running through my head all at once. Rado’s quit school, that was a big moment — we both got on board completely.

AD: And you’re doing interviews. Do you enjoy it? What number is this for you?

JR: I like it. I think it’s number… 3? 4? I’d say this was the best one — we’ve done two email interviews, the awkward one from before this, and now this. I like this, I like walking down the street. I’d rather do this than phone interviews.

AD: What are your official capacities as the “Twnty-First Century Ambassadors of Peace and Magic”?

SF: Basically, turning the pyramid upside down. Just, you know, the next record, We Are the 21st Century Ambassadors of Peace and Magic, is supposed to bring world peace. That’s the goal, in some abstract way.

AD: So what vehicle are you touring in now?

AD: Can you kick out the jams?

JR: Yeah, we got a cassette-to-iPod connector going on. We played a couple of tracks from Katy Perry — I have the first three tracks off of Teenage Dream. We listen to that at least once a trip. We were going on Fleetwood Mac pretty hard, but today I was like, I can’t do that again.

AD: You reach a breaking point with the Mac.

SF: I can’t listen to Rumours again. I will vomit if I listen to that again.

AD: Talk about rejecting your influences. Last thing — you get to choose the ideal lineup, the show you play on for one night — who’s one the bill with you?

SF: We’ve thought about this before!

JR: Like, who would be in our band or who else would play the show?

AD: Who would open, or who would you open for.

SF: No we’d headline, we’re talking about an ideal situation.

JR: Richard Swift… Hanson. I don’t think we’d even play that show, it’d just be a good one to catch. words/ b kramer

7 thoughts on “(Catching Up With ) Foxygen :: The AD Interview”