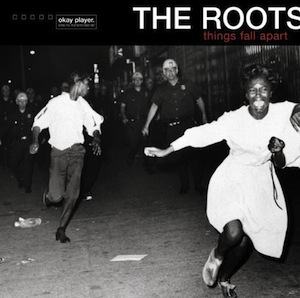 It’s the utter and ineffable fear on the teenage girl’s face, I think. Or the uncaring and blank look of the police officer furthest to the right. Perhaps it’s the fleeing boy, whose face we only see in semi-profile, looking back as he runs. In reality, it’s all of it and the fact that we know this was real. This happened. That is what makes the album cover to the Roots’ Things Fall Apart so harrowing, so bothersome.

Named after Chinua Achebe’s novel of the same name, itself named after the above line from Yeats’ poem, Things Fall Apart was originally released with five different cover photos. The one seen here became the standard that you will find on new copies of the record today. The other four are just as disturbing — a crying child, the inside of a burned church, an infant crying in the rubble of Shanghai following Japanese attacks during World War II, the bloodied arm and hand of mafia boss Giuseppe Masseria after his shooting death in 1931 — and echo the chaotic implications of the album title. Yeats’ original poem was written in the aftermath of World War I and reflected on the fractured nature of humanity in the wake of the “war to end all wars,” the events that gave us the Lost Generation. Achebe’s novel took Yeats’ theme and applied it to the destructive chaos of colonialism in Africa, specifically Nigeria. The novel’s main character, a highly successful yet problematic member of his tribe, slowly has his view of the world torn asunder by the invading forces, both spiritual and physical, of the colonial powers.

That the varied album cover photos come from different periods of the 20th century connects to Yeats’ theme while the images of the Civil Right era — the main picture comes from a riot in the Bedford-Stuyvesant neighborhood in Brooklyn during the 1960s — echo Achebe’s. The album was released in February of 1999, a time when many Americans saw things as generally positive due to an economic boom that had resulted in an actual government budget surplus. But the reality was grimmer — gaps between ethnicities in education, ongoing depression in real wages, widening of income disparity, economic colonialism, and genocide. The photograph on the front may have been more than thirty years in the past, but there were many arguments for why society was no less broken. By juxtaposing documentation of the past on the cover with the content of the album, its lyrics and mindstate firmly planted in the present, the Roots were calling on their listeners to understand how the more things change, the more they stay the same.

It’s interesting, too, to note that the band saw its own fissures in the wake of the album. Things Fall Apart was in many ways the band’s breakthrough, reaching as high as number four on the Billboard 200 Albums chart as their first album to go gold and sell 500,000 copies. But it was also the last to feature one of the band’s original members, rapper Malik B, who left the band following tours for this album to deal with drug addictions. Though the band would emerge from this to release the excellent Phrenology, this was the last time that the original founding lineup would all perform together on an album.

Things Fall Apart‘s cover art is the epitome of what happens when artists look outward to look inward, to find the universal in the specific. What looks like merely a black and white documentation of the Civil Rights era becomes something more in the context of the album and the era in which it was released. It’s a call to consider one of the hoariest, but truest, clichés — that those who do not learn from history are doomed to repeat it. And more than that, perhaps, to witness the rough beast, its hour come round at last, being born. words/ j neas

The Roots will be one of the headlining bands at this year’s Hopscotch Music Festival in Raleigh, North Carolina, September 6th – 8th. AD’s J. Neas will be there and you can follow him at the festival on Twitter.

7 thoughts on “Scratch The Surface :: The Roots – Things Fall Apart”