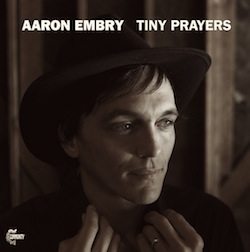 Aaron Embry waited thirty-six years to make his debut album, Tiny Prayers. It’s the type of record you only get a chance to make once — an album he began writing while on the road with his friend, Alexander Ebert. Before that, Embry was a hired gun for some other folks you may have heard of (Willie Nelson, Elliot Smith). Mostly a piano player, this particular set of songs came to Embry via an old tenor guitar, in an octave mandolin tuning, and a harmonica.

“Moon of the Daylit Sky,” the album’s opening track and first single, is a rarified thing. Opening with just acoustic guitar and harmonica, like half the other folk songs before it, something immediately sets Embry’s apart. The arrangement is perfectly sparse, but there’s a bit of old-fashioned magic as some brushed drums, mandolin, and Embry’s tinkling of the ivory fill out the song’s skeletal frame.

Emrby has just a small warble of a voice, but it carries immense weight. It’s hard not to think of Phosphorescent’s Matthew Houck when listening to him. Embry sounds uncannily like Houck at times, though singers can often arrive at the same result through different means. (Perhaps they both learned to sing by listening to people like Willie Nelson.)

“Raven’s Song” shows off more of Embry’s graceful piano chops. He can be airy and vague on the keys but only in the way that a great jazz pianist can–not some hack banging out chords in the same positions. Other songs like “No Go” and “Good-Red-Road Man” are minor-key dirges, reminiscent of Appalachian murder ballads. His lyrics contain images that aren’t always clear–“My head all full of lies and smoke / An afterlife of stupid jokes,” he sings on “No Go”–but evocative.

The music industry often gravitates to young Turks, though it’s embracing more and more artists who seem to find their true voice a little further down the weathered track (Jonathan Wilson and Hiss Golden Messenger are two others who come to mind). However the hell you end up discovering Aaron Embry, it’s hard to shake him once you do. words/ d inman